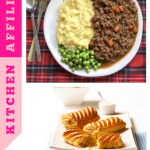 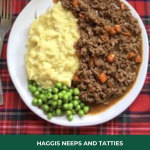 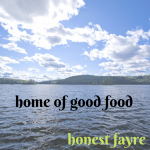 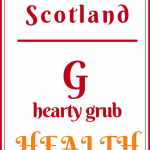 Being a Scot myself, I should be an authority on Scottish meals. After all, I do eat one every day. Except, for the time I spend in Spain on holiday. These are times for Spanish cuisine.

However, there is more to Scottish food than fish & chips, stovies and pie and mash. I believe that the Scots are cannier than we might think and the food we eat is healthier than a cursory glance might reveal.

I have been delighted that compiling this list was not only a trip down memory lane but, a reminder that a lot of Scottish meals are good healthy food.

There are exceptions and I am sure you will have heard of the deep-fried Mars Bar. This is not a traditional Scottish dish and I sure it was just a very clever marketing wheeze by a Glasgow fish and chip shop.

I have not tried and nor will I ever try a deep-fried Mars Bar. I have too much respect for my digestive system.

The Scottish Classic Mince and Tatties

There cannot be anyone living in Scotland, who hasn’t tasted mince and tatties. This is one of the food staples of Scotland.

Classic mince and tatties is such a simple meal that can be quickly prepared for a mid-week dinner or the traditional Sunday repast. This is one of the Scottish meals that is ever popular.

Cullen Skink is a rich, creamy chowder of haddock, potatoes and onions. The name comes from Cullen, a small fishing village on the North East coast of Scotland.

This is a good healthy soup that is far more appealing than the name may suggest.

Traditional Scottish stovies are made with potato, onion and sausage. But, one variation that I am aware of substitutes corned beef for the sausage for an even cheaper meal idea.

Stovies are a simple one-pot meal cooked on the stove. Hence the name. There is no fixed recipe for this every day meal. It often employ the leftover meat from your Sunday roast.

Who doesn’t love a crusty, luscious steak pie. Well, I should put my hand up because I am, supposedly, gluten-free. But, I am forced to make an exception when we have Scottish Steak Pie for Sunday Dinner.

In my humble opinion, there are two things that could improve on the traditional Scottish Steak Pie. Swap the puff pastry for a suet crust pastry and add some lamb’s kidneys.

You can’t go wrong with a wholesome, hearty bowl of soup. This recipe for Scotch Broth delivers exactly that. A warming, satisfying bowl of tasty goodness.

Don’t you just love the name of this dish: runbledethumps. The origin of the name is a little vague but, apparently the word rumbled used to mean scrambled.

The town of Forfar is not very far from my home. I have long been aware of Forfar Bridies and I must have tasted my first bridie, over 40 years ago.

These bridies of delicious shortcrust pastry parcels of minced lamb with onion and traditional seasoning.

However, they may get called Scottish pasties, they bear little resemblance to their vegetable- filled, English counterparts.

I love Cornish pasties but, a Forfar Bridie is so much more filling.

A traditional Scottish breakfast would bot be complete without a couple of tattie scones.

Not unlike an Indian chapati but, much more substantial. Tattie scones are delicious with baked beans and Lorne sausage.

No, I am not suggesting you should have tablet for your evening meal. This wholly unhealthy sweet is an occasional treat. It is solid sugar and should be consumed very sparingly.

However, having issued my health warning. This is one of the most indulgent, delicious sweets to will ever find.

9 Scottish Meals to build your stamina