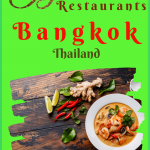 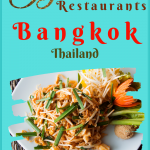 Before we begin explorng the best restaurants in Bangkok we should famiarise ourselves with the history of Bangkok as provided by Britannica.

Bangkok, Thai Krung Thep, city, capital, and chief port of Thailand. It is the only cosmopolitan city in a country of small towns and villages and is Thailand’s cultural and commercial centre.

Bangkok is located on the delta of the Chao Phraya River, about 25 miles (40 km) from the Gulf of Thailand. It was formerly divided into two municipalities—Krung Thep on the east bank and Thon Buri on the west—connected by several bridges. In 1971 the two were united as a city-province with a single municipal government.

In 1972 the city and the two surrounding provinces were merged into one province, called Krung Thep Maha Nakhon (Bangkok Metropolis). The metropolis is a bustling, crowded city, with temples, factories, shops, and homes juxtaposed along its roads and canals. It is also a major tourist destination, noted for bountiful cultural attractions and a nightlife that includes a flourishing sex trade.

The name Bangkok, used commonly by foreigners, is, according to one interpretation, derived from a name that dates to the time before the city was built—the village or district (bang) of wild plums (makok).

The Thai call their capital Krung Thep, which is the first part of its mellifluous and lengthy official name meaning “the City of Gods, the Great City, the Residence of the Emerald Buddha, the Impregnable City (of Ayutthaya) of God Indra, the Grand Capital of the World Endowed with Nine Precious Gems, the Happy City Abounding in Enormous Royal Palaces Which Resemble the Heavenly Abode Wherein Dwell the Reincarnated Gods, a City Given by Indra and Built by Vishnukarm.”

Bangkok has one of the most diverse food scenes in the world. If you are visiting Bangkok for just a few days, or even longer, you might be overwhelmed with choices. Not to worry — we have compiled a list of the best restaurants in Bangkok, Thailand.

What are the top 7 restaurants in Bangkok?

Bangkok is known for its delicious flavors and low-costs. In this list, you will find some of the cheapest Michelin-starred restaurants in the world, fine-dining experiences, and the world’s craziest food court experiences.

Best Places to Eat in Bangkok

There are no two ways about it: you’ll find some of the world’s best food in Bangkok. Whether you want to explore traditional Thai food or stick to what you know best, Bangkok offers something for every taste and every budget. If you’re traveling on a low budget, street food is your best bet as it is extremely affordable and very easily accessible all over the city.

Apart from the lively street food culture in Bangkok and food markets by the numbers, there are restaurants by the hundreds worth going to. The only food-related problem you’ll have in Bangkok is deciding where to go! I’ve lived here my entire life and I’m still continuously exploring the spots for all the best food in Bangkok. Here are my recommendations for the best places to eat in Bangkok if you’re planning a first-time trip to the city of angels.

The first thought that comes into people’s minds when visiting Thailand are the beautiful beaches. You definitely shouldn’t miss the beaches, but while booking a flight to Phuket, make sure you also add a flight to Chiang Mai. There are no beaches, but the culture and food of Chiang Mai are not to be missed.

Trust me, I am just a regular, New York City girl, trying to travel the world one day at a time. and trust me, if I can do it, then you can do it too.

On my blog, you’ll find hopefully hilarious. practical, down-to-earth tips for solo female travellers on any budget. I want to help you discover Europe, New York City, and beyond. Without making all the same disastrous travel mistakes that I have.
However, I travel beyond the typical and I often find myself in unique and totally weird places. Meeting insanely interesting people. I want to inform you. But, also make you crack up and all the insane situations that I find myself in.

What to Eat in Bangkok

In Bangkok, you can find food from all nooks and corners of the world. And these are not cheap imitations. They are created and curated by the resident immigrant population. So they are authentic. This time when we were in Bangkok we decided not to stick to Thai food alone.

Trust me, we love Thai street food and curries as much as you do. And we sufficiently binged on them. But we tried out other interesting options as well such as Ethiopian, Portuguese, and Lebanese.

Leaving Bangkok without eating at least one pad thai would be a crime. So make a pit stop at Thip Samai, widely considered one of the city’s best vendors hawking the classic. Its smoky, slightly sweet noodles topped with prawns, bean sprouts, crushed peanuts and chilli flakes. And what got the place a Bib Gourmand. Expect long queues well before it opens at 5pm.

At hit fusion restaurant 80/20, tattooed chef Napol ‘Joe’ Jantraget experiments with cooking techniques, food pairings and local produce even most Thais have never heard of, such as hom choo, a thin root vegetable, and ka-yang, a cumin-tasting leaf. Paving the way for the rediscovery of even more obscure ingredients, his food laboratory in the south of Thailand is currently in the works.

Thonglor is trending. It’s one of the busiest areas in the city at night and filled to the brim with tremendous restaurants. You can get great burgers, pasta, tacos, and pretty much anything else your heart, or stomach, desires. Here are some of our top picks from the restaurant scene in Thonglor.

If you are looking for pizza, Carbar is the place to be. They serve a delicious, thin crust pizza pie, with high-quality toppings. It’s apart of a shared collective of restaurants titled “72 Courtyard.” They also have a great selection of wine. The place is relaxed but definitely upscale in it’s quality.