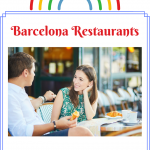 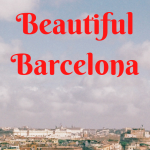 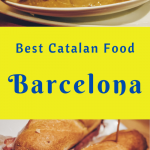 The city of Barcelona is a wonderful destination for the lover of history, architecture and food. While the best restaurants in Barcelona are an undoubted draw for the foodie traveller, there is so much more to this amazing Catalan city.

It is possible to devote an entire blog to Barcelona. So, trying to give a synopsis in a single post is always going to leave gaps in the summary.

However, we shall try to mention at least some of the main attractions that you really should make time to investigate.

According to the Lonely Planet website, Barcelona is an enchanting seaside city. With endless culture, stunning architecture and an unrivalled food and drink scene. Lonely Planet is a site I often use as a starting point to my travel research.

Where to eat in Barcelona

When you visit Barcelona, there are restaurants, tapas bars and cafés you really shouldn’t miss. I understand that visiting evertthing during a weekend city break is often impossible.

But, having a Foodie Guide from someone with inside information will help you catch the most important eating places on your itinerary.

Take a guided tour of La Sagrada Familia, this is a stunning architectural masterpiece. Gaudi is a name you will encounter everywhere in Barcelona.

Antoni Gaudí is considered to be the greatest exponent of Catalan Modernism. The work of Gaudi is a one-of-a-kind style. Most of his work was in Barcelona and La Sagrada Familia is his most impressive and undoubtedly his most famous.

La basilica de la sagrada familia, to give it the full name, is the most prominent landmark in the city of Barcelona. This is a minor basilica of Roman catholic denomination.

I often set myself the task of creating a blogger’s guide to any destination that I visit. However, by the time I have familiarised myself with the best local eateries, it is inevitably time to return to the airport.

You can explore the Roman origin of the city, in the Gotic Quarter. This is Barcelona’s old town.

Where you will discover the stories of saints and martyrs, amulets of executioners and the dammed gargoyles of the cathedral.

Barcelona has a mysterious, dark side, that will leave you amazed and speechless.

The best and cheapest Tapas Bars

As a visitor to Spain, you must taste tapas. These delightful snacks can be found in almost any bar in any town. Barcelona has a bustling food scene. So you will find many excellent Tapas Bars.

Park Güell is a UNESCO listed attraction. The amazing park is where Gaudi put his architectural mind to landscape gardening. The park is incredibly popular and visiting is limited. You really must book in advance.

This stunning park was the creation of Gaudi after being instructed by Count Eusebi Güell. The Count has bought a tree-covered hillside just outside Barcelona. This was, essentially, the folly of the Count. He wanted to create a miniature city to show-off to the landed gentry.

It was a commercial flop and was abandoned a couple of years later. But, not before Gaudi had built 3km of roads and walkways. The city bought the estate in 1922 to be used as a public park.

The best Restaurants in Barcelona

I often wonder how anybody could decide which retaurants are the best restaurants.

However, Taylor offers us one person’s take on the fantstic Barcelona food circuit. And, I must say his selection looks pretty tasty.

Perhaps one of the most madcap design ideas of Gaudi is Casa Milà. This apartment and office block was commissioned by the businessman Milà. This bizarre edifice is better known as La Pedrera (the quarry) because of its uneven grey stone facade.

Kristen confesses that finding the best restaurants in Barcelona can seem to be overwheling. But, she is a stoic traveller, and does not quail before the challenge.

Gaudí at his fantastical best, can be seen in Casa Batlló. One of the strangest residential buildings has a playful facade that has been inspired by the marine-world. This is a building erected out of revolutionary experiments in light and architectural form.

The Restaurants and Bars of Barcelona

If you were in any doubt that Barcelona is a great foodie destination. Jessica offers us her selection of great restaurants with fine cuisine.

The Picasso collection, held here, concentrates on the work of his formative years. You will leave Museu Picasso with an appreciation of Pablo Picasso as the true original. He was always one step ahead of himself and his contemporaries.

The best Tapas in Barcelona

My only criticism of tapas is probably misinformed. The tapas bars that I have tried have all been great. But, returning on a second occasion, inevitable, left me facing the same selection.

The menu was not being varied from day to day. I am sure this si not true of the Tapas Bars presented here.

The most famous street in Barcelona is Las Ramblas. The tourist magnet is a window into Catalan culture. Shops, restaurants, cultural centres and theatres all set in intriguing architecture. Las Ramblas has been the scene of horrific terrorist attacks in 2017. But, this has not dulled the appeal for visitors and performers.

If you try, as I did, to translate the name La Rambla from Spanish, you will have been disappointed. The word Rambla comes from the Arabic raml, meaning a stream which used to run through the area.

BEST Restaurants in Barcelona for Tapas