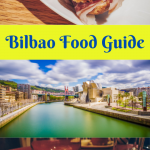 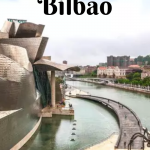 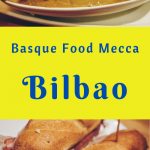 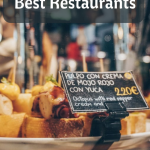 Bilbao is in the Basque Country, an area of Spain, famed for its cuisine. But, before I delve into the best restaurants in Bilbao, I should relate a little Basque Country history.

The Basque Country is an autonomous community of Spain. There is no official capital of the Basque Country, although the city of Vitoria-Gasteiz is the de-facto capital. The High Court of Justice is located in the city of Bilbao in the province of Biscay. Bilbao is also the city with the largest population.

The people of the Basque country have strong cultural traditions and celebrated cuisine. Their distinct language pre-dates the Romance languages. Bilbao has a vibrant riverside feel with unique architecture and bustling shipyards.

The country is known to the locals as ”the land of Basque Speakers” or Euskadi or Euskal Herria, in their own language. To the Spanish, it is El Pais Vasco.

The Guggenheim Museum Bilbao has completely transformed the city. Designed by the American architect, Frank Gehry, has put Bilbao on the world map. On the former site of the Compañía de Maderas timber company. Gehry had found the perfect spot below Mount Artxanda.

Old Quarter and The Ensanche

When the city was founded, over 700 years ago. The inhabitants of Bilbao were market gardeners and fishermen. There were twp main centre of population, at that time. The mining area and the Old Quarter.

It was the Old Quarter that engaged in commerce and port activities. Originally, the Old Quarter had been walled but, it became necessary to remove the walls and build four streets perpendicular to the river. This area is now pedestrianised and known as the Seven Streets.

The area bounded by the Maritime Museum, Jardines de Albia, Colón de Larreátegui and Paseo Abandiobarra is where you will find the city’s most important art galleries.

You will see the work of  artists such as Dalí, Chillida, Koons and Bourgeois.

The construction of the Guggenheim Museum initiated a period of creativity in the form of contemporary architecture using shape and new materials.

Where to eat in Bilbao

Bilbao is the most populace city in the Basque Country. And, it has a fine food heritage with many resaurants, cafés and bars.

It has been said, when it comes to food, other Spanish cities bow to Bilbao. The food history of Bilbao is unquestionably dominant.

Places to eat in restaurants in Bilbao

Bilbao has an eating experience for everybody. From the cheap and cheerful pintxos and wine bars to the world-class Michelin starred excellence of the restaurants you know you can’t afford.

Some of the Basque country industry was the manufacture of berets and playing cards. This is demonstrated in the museums although pockets of this activity still persist.

The Best Things to do in Bilbao

Housing some of the finest original works of Van Gogh and Picasso, the Guggenheim Museum is an excellent way to spend three or four hours absorbing the culture of the Basque Country.

Steel and ironworks were the centres of heavy industry. Blast Furnaces of Biscay was the biggest company, running the blast furnace network in the 20th century. Blast Furnace #1 was declared National Heritage in 1999 and now forms part of the industrial museum.

ETA was the independence movement that killed hundreds of people in its fight for a Basque homeland. This violent struggle contimued until the death of Franco, the authoritarin leader.

Basque was finally given a certain level of autonomy and peace returned. This conflict dominated the British news for much of my childhood.

The peaceful and bustling city of Bilbao, of current time, belies the troubled past it has endured.

You cannot come to Bilbao and fail to see the culinary heritage in every restaurant and pintxos bar in Bilbao.

From Madrid to Bilbao

I am not sure that I understand why you might want to travel from Madrid to Bilbao. Both cities have so much to offer in terms of history, culture and food. But, Bilbao is different. The people are different and even the food is different. Oh! and the language is very different.

However, Marco looks at the options available to you if you should wish to travel to Bilbao from Madrid.

This is a photographic exploration of the Bilau Bar and Restaurant.

Bilau Bar is in downtown Bilbao, in the heart of the culinary sector. The style of the building is a combination of classic style with Art Deco touches and contemporary English.

A triumph of elegance and architecture. Surely, one of the best restaurants in Bilbao.