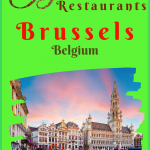 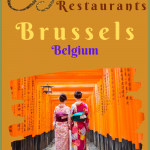 Before we begin exploring the best restaurants in Brussels, we should take a moment to improve our knowledge of this very European city.

From a medieval settlement in the swamps of the Senne to the beating heart of the European Union, Brussels most certainly has an interesting history. Here are the most important events that have shaped the city we know today.

Brussels humbly started out as a small settlement by the river Senne, supposedly in the 10th century. It is said that the name Brussels originates from the word Broekzele, which translates to ‘settlement in the swamp.’

The founding date of the city is uncertain. Some historians state the existence of Brussels began as early as the 7th century, while others claim the city started out as a fort built by Charles of Lorraine around 979.

What’s certain is that Brussels originates from three spots around the Senne: a valley and two nearby hills. Brussels was first mentioned in the 11th century as a portus, a river port.

The Grand Place was referred to in 1147 as the ‘lower market.’ Situated close to the port on the Senne and along an important road, the marketplace did well as a bustling center for trade. But the buildings that make the Grand Place famous today were built (and rebuilt) much later.

The Town Hall came first, in the 15th century. With its beautiful flamboyant gothic design, 96 meter-high tower (315 feet) and detailed statues, it evidently must have been a costly project. It took about 18 years to complete the structure, and it has been renovated many times throughout history. This is why the building is not entirely symmetrical; if you look straight at the Town Hall, you’ll see that the tower doesn’t stand precisely in the middle.

To read the full history visit this site.

Best Places to Eat and Drink

Brussels is one of the most famous gastronomic destinations in the world, known for its specialties such as moules, frites and chocolate. Yet it also has one of the highest concentrations of Michelin stars in the world and many innovative new dining spots.

We have rounded up 10 of the best places to eat in Brussels, to wet your appetite. Here are 10 of the top restaurants in Brussels that you’re sure to love.

If you love to eat tasty, healthy food but are on a tight budget. You’ll love our selection of cheap restaurants in Brussels. From Asian cuisine to traditional Belgian food these are our picks. For 13 of the best cheap eats in Brussels, Belgium updated for 2018!

However, a few years ago, I wrote an article on Cheap Eats in Brussels for RTW Expenses. It’s been a hit with visitors to Belgium, as Brussels can be a tricky spot to find an affordable meal if you don’t know where to look.

Of course, we’ve always had the traditional Belgian foods in Brussels – waffles and frites. I list my favourite spots to get these traditional ‘cheap eats’ in the RTW article, as well as my favourite budget seafood, pizza, and brunch restaurants.

From burgers to burritos, truffles to toasties, you can find it all in a food truck in Belgium. We share 9 of the best food trucks in Brussels and beyond.

Food trucks have been all the rage in North America and the UK for more than ten years now. Belgium, however, was slow to catch on to this foodie trend. Despite having a great street-food culture in Brussels, the closest you could come to a food truck was a waffle van – until now.

Over the past two years, we’ve watched the food truck scene explode in Brussels. With this year’s Food Truck festival, and weekly food truck lunches at the BIP. We are excited to say, the food truck trend seems here to stay, in Belgium.

Local Guide to Waffles in Brussels

Its finger-licking chocolate, mouth-watering waffles and popularity-gaining speculoos biscuits make Belgium a culinary hotspot of the sweetest kind. All of these delicacies are widely available in most Belgian cities but especially in Brussels, the capital. It’s where the streets are lined with chocolate shops and where you’ll find waffle trucks on every corner. One thing’s for sure: You’ll never have to worry about what to eat in Brussels.

As much as I love chocolate, for this article I’ll focus on Belgian waffles. Before I let you in on where to find the best waffles in Brussels. Let’s have a look at the different types of Belgian waffles and some popular toppings.
Let’s dive in, my sweet-toothed friend.

The best Restaurants in Brussels

Let me take you on a food tour through Brussels. Where the art of beer brewing and chocolaterie is raised to a new level. After livingfor 3 years in Brussels and visiting often. I prepared this selection of my favourite places where to eat Belgian food in Brussels.

You might think about how a post about food and restaurant goes along with my topic of eco-friendly and slow outdoor travel? Well, first of all, gastronomy is for me a crucial part of a culture. As I always try to get to know a foreign culture in all its facets, food plays an important role as it tells you a lot about the history and “character” of a society.

Where to Eat Brussels Restaurants

Belgium is known for 3 things, chocolate, moules and frites – oh wait and the beer! I was in the capital and wanted to know where to eat in Brussels.

I went to a horrible spot and normally I don’t share these stories but I wanted to prevent others from going here or trying Belgian food – and I also have suggestions on better restaurants in Brussels.

Brussels is an old city, it’s the headquarters of the EU, and it’s worth a visit! But first? What will you eat? Luckily, in a city that loves sweets, frites, and hearty traditions, you’ve got some great options.

Pierre Marcolini is a chocolate shop, but it’s biggest success are the macarons. Trust me. I thought I’ve had good macarons, and then I tried these. Soft, subtle flavors and they melt in your mouth.