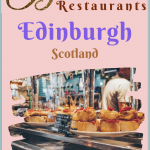 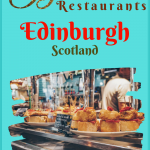 Before we take a seat and don our napkin to enjoy the best restaurants in Edinburgh, we should delve a little into the fascinating history of this ancient city.

Edinburgh’s long history is amongst the most intriguing and exciting of any city in the UK. Edinburgh has been the capital of Scotland since 1437 and gained city status in 1889, over the years Edinburgh has developed a world famous and truly fascinating past.

Edinburgh welcomes tens of thousand of visitors each year, and boasts a reliable transit system. There are hundreds of hotels, hostels and B&B’s to choose from to suit every budget. You can book accommodation quickly and easily at HotelsInScotland.org.

The earliest human sites recorded in the Edinburgh area date back to 8500 BC and the first signs of habitation on the Castle Rock, Arthur’s Seat and its surroundings date to 900 BC approximately.

During the Middle Ages, a small fort called Dun Eiden was built by the Gododdins probably on the Castle Rock, although the exact location is unknown. In the seventh century, the Angles (the tribe which gave its name to England) attacked the Gododdins and invaded the fort. The Angles took the name “Eiden” and joined it to “Burh”, an old English word meaning fort, thus creating the name of Edinburgh. The fort and the region were not re-captured by the Scots until 1018.

It is uncertain when the royal castle was built on the Castle Rock, but it is believed that it was constructed a little before or during the twelfth century, probably during the reign of David I. A settlement began to grow on the east side of the Rock at this time and Edinburgh and Canongate, considered royal burghs, were allowed to conduct foreign trade.

During the Medieval period, the concept of a friar was founded. Friars, unlike monks, worked for a community and could leave the monastery. In Edinburgh there were Dominican friars, dressed in black, and the Augustinian friars, dressed in grey. Both lived in the southern part of the city.

Scotland’s endless local and sustainable ingredients make for an exciting restaurant scene. These 20 best restaurants in Edinburgh are exactly that. They’re the kind of restaurants that are embracing what is native to the region. And plating it in an exciting way.

When I was in Edinburgh, it was the food scene that caught my attention. Beautiful spaces fitted with unique design and special touches created a restaurant that equally stunning as tasty. As the city is easily walkable. It makes for a great early evening experience to grab a drink at sunset and then make your way to the restaurant. Here’s a look at the Edinburgh restaurants I loved and a few I am saving for next time!

Confession time: Edinburgh’s food scene surprised me. When I first searched for where to eat in Edinburgh. I figured it would be a slew of pubs and a few posh traditional restaurants. While I’m always up for a good Sunday roast, I like a bit of variety when I travel.

Luckily, there’s more to Edinburgh dining than pie and mash. And with reasonably priced restaurants in Edinburgh serving up everything from Mexican fusion to Japanese bento. Your stomach and wallet will be happy.

Edinburgh is blessed with a multitude of great places to eat and drink. They all have local Scottish produce of the highest quality. From foraged food to quirky cafes, there’s something for everyone. Let’s head to Scotland’s capital for our guide of where to eat in Edinburgh.

I was delighted to see that Dishooms was one of the first restaurants to make this foodie guide. This is the restaurant my children took me to for a recent birthday. It was an excellent restaurant with flawless service and amazing food.

Best Places to Eat in the Capital

Edinburgh is one of the most beautiful places located in Scotland,. And there are so many amazing things to do. From visiting its medieval buildings and mysterious alleys to enjoy the local food.

Edinburgh is famous for its history, art and literature, stunning views, traditional cuisine and friendly locals. If you’re after history, you can learn about Edinburgh’s and Scotland’s history by visiting the well-known Edinburgh Castle. Or the National Museum of Scotland. However, if you’re more interested in literature. You need to attend the Edinburgh International Book Festival or visit the Writer’s Museum.

As the day grew nearer and nearer, I knew I was forgetting to plan for something. Forgetting to research something. We arrived in Edinburgh and the first words out of my kid’s mouth were “I’m hungry! Where are we going to eat?” Oh goodness!

I forgot to check which restaurants in Edinburgh were family friendly. As a hub of bars and pubs and various styles in between, there is a fair chance that my kids (especially the 2-year-old) would not be welcome, or there wouldn’t be anything on the menu that they liked.

Where to Eat in Edinburgh Best Restaurants

When I first searched for where to eat in Edinburgh, I figured it would be a slew of pubs and a few posh traditional restaurants. While I’m always up for a good Sunday roast, I like a bit of variety when I travel. Luckily, there’s more to Edinburgh dining than pie and mash. And with reasonably priced restaurants in Edinburgh serving up everything from Mexican fusion to Japanese bento, your stomach and wallet will be happy.

This list of restaurants and cafes covers everything a first time visitor to Edinburgh could want: cool coffee shops, comfort food, classic pubs, and some Harry Potter magic. Best of all, each location is walkable from the Royal Mile.

A Restaurant Guide for Edinburgh

In this restaurant guide, I’ll be sharing where to eat in Edinburg, since food is a great way to explore this country’s culture. In this post, you’ll find traditional Scottish dishes, as well as restaurants, pubs, cafes, bars, and speakeasies I found while visiting Edinburgh.

When I initially thought of eating in Scotland I imagined haggis, black pudding and greasy fish and chips – oh goodie. Although these dishes are traditional in Scotland, I was delighted to find Edinburgh offered a variety of delicious food options and modern food experiences outside of typical pubs. If you do want to try some traditional Scotish cuisine, you will be well catered for.