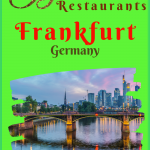 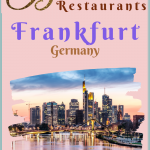 Before we start exploring the best restaurants in Frankfurt, we should learn a little of the city history. Frankfurt is in the state of Hessen in western Germany. The city lies along the Main River about 19 miles (30 km) upstream from its confluence with the Rhine River at Mainz.

There is evidence of Celtic and Germanic settlements in the city dating from the 1st century BC, as well as Roman remains from the 1st and 2nd centuries CE. The name Frankfurt (“Ford [Passage or Crossing] of the Franks”) probably arose about 500 CE, when the Franks drove the Alemanni south. But, the first written mention of Franconofurt stems from Charlemagne’s personal biographer, Einhard, in the late 8th century.

The Pfalz (imperial castle) served as an important royal residence of the East Frankish Carolingians from the 9th century through later medieval times. In the 12th century the Hohenstaufen dynasty erected a new castle in Frankfurt and walled the town. The Hohenstaufen ruler Frederick I (Frederick Barbarossa) was elected king there in 1152, and in 1356 the Golden Bull of Emperor Charles IV (the constitution of the Holy Roman Empire) designated Frankfurt as the permanent site for the election of the German kings.

If you want to know more about early Frankfurt, you can read the full arrticle from Britannica.

Where to eat in Frankfurt

Today I present to you Frankfurt’s Red Light District or in German, das Bahnhofsviertel. (The train station district.) This area is totally going through the process of gentrification right now and I happen to live right in the crux of it. This is your insider’s guide to the best places for food and drink in Frankfurt’s centre.

These are places that you probably wouldn’t find if you were just here as a tourist. These are locally known and cool spots.

Today I present to you Frankfurt’s Red Light District or in German, das Bahnhofsviertel. (The train station district.) This area is totally going through the process of gentrification right now and I happen to live right in the crux of it. This is your insider’s guide to the best places for food and drink in Frankfurt’s centre.

This is our absolute favourite restaurant in the Bahnhofsviertel. Bento Sushi is owned by the most amazing gal called Thi and her sushi is by far the best in town. The tuna and salmon simply melt in your mouth…. just like butter.

A Layover at Frankfurt Airport

Got a Frankfurt airport layover? This post is for you! Last week my husband and I flew to Frankfurt with Lufthansa on a project. It was a crazy whirlwind of travel and due to events, we were only able to spend one night in Frankfurt before we had to fly back to the United States.

While researching things to do on a short layover in Frankfurt, I noticed that a LOT of flights around the world frequently use Frankfurt for layovers.

This is a detailed itinerary for 24-hours in Frankfurt if you happen to have a layover or are stopping on your way through. One day in Frankfurt is enough to see lots of the city and check out most of the top things to do in Frankfurt, Germany’s financial capital.

If you’re staying more than 24 hours in Frankfurt then have a look at some great day trip options.

Frankfurt is a dynamic and popular city located right in the center of western Europe. More than 10,000 people move to Frankfurt every year; over the past decades, it has become a highly international city. About half of all children born here had non-German parents. Being the main hub for the financial industries, and having the largest airport in Germany, Frankfurt is a city of jobs and of money. But also of culture: only the capital (Berlin), has more world-class museums, opera houses, concert halls and art galleries.

Germans are conservative folks, so you’ll find many old-fashioned and quite charming pubs and restaurants in Frankfurt: the folksy and original “apple cider joints” (“Apfelweinlokal”), have a world-wide reputation of being great places to meet locals and have a hearty, inexpensive meal. But Frankfurt also has the most exotic international cuisine — be it Uzbeki, be it Korean, or Turkish… This guide will show you the original, the authentic, the attractive places to eat and drink in this unique city. Enjoy!

An Evening in Frankfurt

“Frankfurt? That’s only for banks and businesses. There’snothing to see there.”

That’s a statement I often hear from people around the world when they talk about Frankfurt. The city is known for its skyscrapers and its big airport but not much else. So, imagine my surprise when I moved there a year and a half ago and found out that there are so many things to do and see, I still have a long list of places I want to visit.

If you’re here on business, you’re in luck. You will find plentry of amazing things to do and see after five.

Frankfurt is Germany’s most international city, but also an old-fashioned place with dozens of traditional “apple cider joints”, where you are sure to meet locals while you enjoy a hearty meal.

This guide focuses on the many original, authentic, and attractive places to eat and drink in Frankfurt. Among your choices will be a Uzbeki restaurant, or a Japanese place that’s like straight out of 1970s Tokyo, or a youthful veggie paradise. Enjoy!