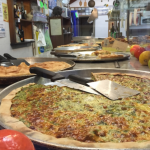 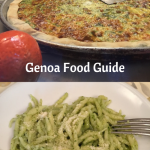 One of the world’s best-kept travel secrets is Genoa or Genova. A very mild and pleasant climate will welcome the newly arrived traveller. Geographically close to the South of France, Genoa is the gateway to the Italian Riviera. A culinary heaven, you will be spoilt for choice in your search for the best restaurants in Genoa.

Many of the top city attractions can be found either near the Piazza de Ferrari or close to the old port of Genoa.

There are good rail services operating out of two main railway stations. Regular services run to Milan, Rome and the south of France.

Farinata is a type of thin, unleavened pancake or crêpe made from chickpea flour. It originated in Genoa and later became a typical food of the Ligurian Sea coast, from Nice to Elba island. My linguistic exercises should have given me a clue. Farina is the Spanish word for flour.

The Lonely Planet is very impressed with Genoa which is the largest seaport in Italy and is the most confusing meld of grandeur and squalor. Today it is the gateway to the Italian Riviera but, a stunning architectural heritage speaks of former glory.

Where to eat in Genoa

We are getting our information straight from the horse’s mouth, so to speak, because Sarah, the lady food blogger behimd this post, lives in Genoa. So she she knows exactly where to find the best restaurants in genoa to eat like a local.

Sarah begins with a word of caution reminding us that Genoa is not Bologna (the foodie capital) so you need to choose your restaurant with a little more care.

Despite the earlier caveat, there are some very good restaurants in Genoa. There is incredible history attached to Genoa and the linked visitor guide takes us to their 8 favourite Genoa restaurants.

However, Genoa has been awarded the European Capital of Culture and features on the list of UNESCO World Heritage Sites. It also boast one of the largest seaports in the country.

This foodie guide takes you around the best seafood retaurants in Genoa. Enrica gives us a price guide for each establishment and I think I will need to save carefully before I visit.

But, being a devoted pescatorian, it will be well worth the expense.

You really have to visit the associated site to see the pictures of these beautiful Italian restaurants.

Even if you are not a foodie, you will love these wonderfully quaint, Italian buildings.

Fall in Love with Genoa Italy

The port of Genoa is one of the largest and busiest sea ports in the Mediterranean sea. The port has a long seafaring history.

Tania was lucky enough to book a spacious apartment on Corso Solferino for her visit to Genoa. This was a beautiful old apartment with elaborate mosaic floors.

Old Genoa is the biggest medieval town in Europe and features the ruins of a monastery from the 12th century.

There is a wealth of fabulous architecture and many palaces, which had been home to the nobility of the 16th century. These very wealthy families made their fortunes from trade, banking and shipbuilding.

Food and Wine of the Italian Riviera in Genoa

This book is a food guide to Liguria. Attempting to understand the local culture by exploring the food of the region.

Where to eat Genovese

Sarah seems to think it can be quite difficult to find a good place to eat in Genoa. But, that is because she used to live in Bologna which is renowned for food.

However, she has managed to put together a good list of excellent restaurants for you to try.

I will not provide the list of restaurants Srah has selected. You will need to jump over to ger blog to get the details.

The cuisine of Genoa is restrict by the terrain of the location. The rocky mountains of Liguria make farming near impossible and livestock scarce. That does not make the \\genoese food bland or limited. But the Genoese diet is predominantly vegetarian or pescatarian.

You may well find the local restaurant menus carrying the following dishes:

Best Restaurants in Genoa for farinata