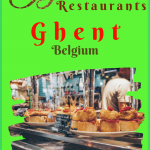 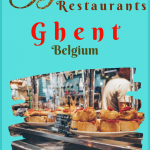 Before we begin exploring the best restaurants in Ghent, we should take a quick look at the history if this incredible city,

One of Belgium’s oldest cities and the historic capital of Flanders. Ghent was powerful, well-organized in its wealthy trade guilds, and virtually independent until 1584. Within its walls was signed the Pacification of Ghent (1576), an attempt to unite the Lowlands provinces against Spain. The Treaty of Ghent (December 24, 1814) marked the end of the War of 1812 between the United States and Britain.

Along with Brugge (Bruges) and Ypres, Ghent was one of the chief towns of the medieval county of Flanders. It owes its origin to the economic developments that occurred in Flanders in the 10th century. And the town sprang up on the banks of the Lys River. At a spot under the protection of a nearby castle built by the counts of Flanders. Ghent grew rapidly in the 12th century, and by the 13th century it was one of the largest towns in northern Europe.

Its astonishing prosperity was based on the manufacture of cloth; Ghent’s luxury cloths made from English wool were famous throughout Europe until the 15th century. The city’s wealth gave it great political power and virtual autonomy from its nominal rulers, the counts of Flanders and (from 1384) the dukes of Burgundy. This situation often led to open conflict.

At the start of the Hundred Years’ War in the early 14th century. Ghent sided with Edward III of England against the count of Flanders and the king of France. Edward’s fourth son, John of Gaunt (i.e., of Ghent), was born in Ghent in 1340. The heavy taxes later imposed by the dukes of Burgundy prompted several uprisings by the town’s citizens in the 15th century. And the army of Ghent was massacred by the forces of Philip the Good at the Battle of Gavre in 1453.

However, you can read the full history of Ghent on Britannica.

If there’s anything that Ghent surprised me with, it’s their cafe culture and quality restaurants! Most cafes that I visited are modern, sleek, stylish and most of all, cosy and warm.

However, if I had all the time in the world, I would linger longer in each of the cafes I visited, taking in the vases of roses, the luminescent lamps, wooden frames hung on the walls, meticulously decorated shopfronts and plush seats.

Together with my local friend, we came up with a list of where to eat in Ghent for the best experience. Without further ado, let’s go on a hunt for some of the best places to eat in Ghent!

The Quirkiest City in Belgium

I challenge you to take a bad photograph in Ghent, Belgium. It simply isn’t possible. This point-and-shoot town is a living postcard everywhere you look. It is so picturesque that it hardly feels real.

I recently found myself in this beautiful city, just a short train ride from Paris and it was the perfect place to be for a weekend away. This Ghent guide features just a few of the many fun things to do in Ghent Belgium.

The Little Wanderbook of Ghent

If you follow me on Instagram, you have probably already noticed my love for Ghent… I keep spamming you with shots of the city. I have many more, but it is time for a list of places to visit.

We stayed at the perfectly located Guesthouse Chambreplus. These are my 9 favorite restaurants in Ghent!

What to Eat in Ghent Restaurants

Eating frites smothered in mayonnaise, nibbling fresh waffles under a mountain of freshly whipped cream and drinking glasses of beer outside in the sunshine is practically inviolable law when visiting Belgium. (In fact, if you look under a microscope at your Belgian passport stamp ‘proost / à votre santé / prost’ may or may not be etched under the flag.)

Enjoying their exquisite pralines is obviously the fourth law, but one I managed to fail miserably, thanks to a bag of Bolognaise flavoured crisps for lunch – but I did take some home to the UK, which totally counts, right?

Why you should visit Ghent

Planning a trip to Belgium? We spent 10 days traveling all over Belgium, and one of my absolute favorite places we went was Ghent. I had never even heard of Ghent before going to Belgium, and it turned out to be one of the most charming European cities I’ve ever visited.

Ghent is a vibrant college town with stunning Dutch architecture and peaceful canals winding through the narrow cobblestone lanes.

The 500 hidden secrets of Ghent reveals these good-to-know adresses, and many more. It’s an affectionate guide to the city, written by Belgium explorer Derek Blyth. This book contains 500 things you need to know about Ghent in 100 different categories. However, some places are to visit. Others are random bits of information.

With this book tucked in your pocket. You can set out to discover places that are different in some way from the normal tourist destinations.
Furthermore, this is a book for visitors who want to avoid the usual tourist spots. And for residents who are keen to track down the city’s best-kept secrets. 500 addresses in total, presented in original lists of 5. Maps & index included.

Right now I’m living in Friesland, the Netherlands at a Retreat Centre. One of my friends and teammates, Stephanie, is from Belgium. She recently invited us to her home in Ghent, Belgium for 6 days. The reason for the invite was to take a little vacation and celebrate her birthday. Of course, we said ‘yes!’ and off we went to Ghent, about a 3.5 hour drive from our home here in Holland. (Note: Ghent is the American spelling, Gent is the European spelling of the city).

As an American, it’s quite cool to hop in the car, drive a few hours and be in another country. And then, if you wanted to. Jump in the car again and be in another country a few hours after that. The proximity of all of these different cultures, architectural styles are quite phenomenal. The choice of food, drinks and ways of life is really captivating. This continuously fills me with a longing for exploration and adventure.