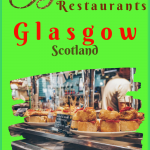 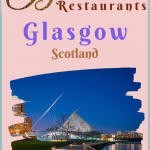 Before we begin to explore the best restaurants in Glasgow, we should take a little time to ponder the history of this great shipbuilding city.

Glasgow, Gaelic Glaschu, city, west-central Scotland is situated along both banks of the River Clyde 20 miles (32 km) from that river’s mouth on the western, or Atlantic, coast. Glasgow is Scotland’s largest city, and it forms an independent council area that lies entirely within the historic county of Lanarkshire.

Glasgow’s Gaelic name, Glaschu, means “Green Glen.” There is evidence of a fortified prehistoric village on the site, but Glasgow did not begin to develop until about 550 ce with the arrival of St. Kentigern (Mungo), who established a religious community there. The present cathedral, dedicated to St. Mungo and begun in the 12th century, was built on the site of the chapel.

The first stone bridge over the Clyde was built in 1350. Glasgow was created a royal burgh in 1450, and its university was founded in 1451. Glasgow prospered as a market centre because it was well situated between Highland and Lowland Scotland and also between Edinburgh—the capital, 45 miles (72 km) east—and the west. Yet it was not until after the union of the Scottish and English crowns (1603) that Glasgow grew significantly.

Thank you to Britannica for the potted history.

Opened by Ronnie Clydesdale in 1971. His family still own and run the place, along with nearby sister establishments Stravaigin and Hanoi Bike Shop. The Ubiquitous Chip holds its own on the West End’s picturesque Ashton Lane, even as cheesy chain-operated bars and eateries close in around it.

The Big Pub upstairs, with its open fire and great drinks selection, marries village local ambience with cosmopolitan cool. Elsewhere in the warren-like building, you’ll find the smaller Corner Bar and the smaller still Wee Pub – the smallest pub in Scotland, in fact. There’s even a brilliant, if very compact, hidden-away roof terrace at the top of the stairs.

I’ve put together this list of best restaurants in Glasgow, because I’ve been stuffing my face with all kinds of delicacies since I moved here in April. I’m talking life-changing burgers and the kind of culinary creativity that makes you (or is it just me?) want to write a song.

My favourite way to experience a destination is through my stomach and I hope this guide helps you get to know my current home a little bit better. I’ve divided it into four locations – the city centre, trendy Finnieston, student-filled & artsy West End and laid-back Southside.

The Ten Best Restaurants in Glasgow

Glasgow is renowned for its stunning architecture, vibrant nightlife and thriving arts scene. Over the years it has also gained a reputation for its extensive range of highly acclaimed restaurants.

However, we list ten places in Scotland’s largest city offering great food with a Glaswegian twist.

Glasgow is home to some of the best restaurants I’ve ever been to in my life. A worker’s city, Glasgow is not really the place for sightseeing. Their motto is “People Make Glasgow” and that’s so true. When Michael and I visited, we met some of the kindest, funniest people we’ve ever met in our lives.

Furthermore, food. THE FOOD. Seriously, as you can see on my Scotland Itinerary, we mostly just ate and drank during our three days there. And now, I’m going to list the 11 Best Restaurants in Glasgow for you to enjoy. Seriously. Go to these places. You won’t regret it.

Almost slap bang by Central Station, Riverhill is a tiny, independent coffee and sandwich shop – note: seating is extremely limited – which, in its rigour and imagination, not to mention its use of regional ingredients (coffee from Glasgow roaster Dear Green, hams and sausages from Puddledub), puts its high street rivals to shame.

A huge savoury scone, topped with cheese and pickled gherkins, was glorious filth – the kind of the thing Riverhill’s near neighbour Gregg’s might do, but not half as well.

Where to Eat in Glasgow

However, this list was curated for North & Leisure by Jenna of In The Details, Darling. She is a virtual assistant, former culinary student and overall foodie with great taste.

In 2013, Glasgow was given the title as the most vegan-friendly city in the UK. But, Edinburgh has always had a number of vegetarian offerings, with vegan restaurants steadily on the rise. Thankfully, it doesn’t have to be one or the other. We can enjoy the vegan food of Glasgow and the vegan food of Edinburgh. On our two week tour around Scotland, Justin and I visited Glasgow first. With all of the yummy vegan restaurants in Glasgow, we can easily see why it was named the most veg-friendly place in the country.