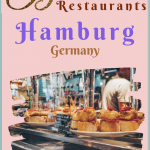 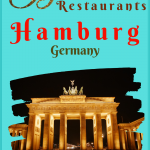 Before we get into the best restaurants in Hamburg, we need the potted history. Hamburg is proud of its long history as an independent and cosmopolitan harbour city, Germany’s ‘gateway to the world‘. Here is all you need to know about the adventurous (and calamitous) past of this bustling North German metropolis.

The first settlement on the grounds of modern-day Hamburg was the Hammaburg fortress, built in 825 between the Elbe and Alster rivers. It was from here that Saint Ansgar lead missions to evangelise Scandinavia. The Vikings didn’t appreciate his efforts and burned down the moated fortress in 845. It was rebuilt only to be burned down time and again in the following three centuries. Eventually, by the 12th-century trade took over missionary work and Hamburg established itself as a city of merchants.

In 1189, Emperor Frederick I Barbarossa granted Hamburg special trading rights, toll exemptions and navigation privileges. It became a Free Imperial City, a status that was the cornerstone of Hamburg’s growth and wealth in the centuries to come.

In the 13th and 14th centuries, Hamburg was one of the key members of the Hanseatic League, a commercial and defensive alliance of market towns that dominated the Baltic and the North Sea trade for three centuries. The league lost importance, with the discovery of the New World, and was dissolved in the 17th century. Yet Hamburg succeeded in dominating the new trade routes, continued to prosper and soon surpassed its former Hanseatic sister cities.

Not only Germany‘s second largest city, but also one of the largest ports in Europe, Hamburg is full of contradictions and surprises. The city hosts an impressive restaurant scene, renowned for its diversity, creativity and high quality.

Whether you wish to taste delicious seafood dishes or have an amazing international dining experience, the city’s eating spots will not disappoint you. Here is our guide to the 10 best.

Breakfast outside, a beer on the beach or an Apérol Spritz at sunset? When the weather is fine, Hamburg is unbeatable. Here comes my ultimate hit list: Cafés, pubs, restaurants and bars – not just for North German midsummer night dreams!

Eating in the great outdoors is ab experience eveybody should try. It makes the whole eating experience more enjotable, more companionable and just so relaxing. It can only be good for your digestion.

However, you maye need to contend with the nuisance of flying invadors like flies and wasps.

We didn’t expect much from Hamburg’s food scene, but this port city surprised us with its outstanding culinary offerings and talented chefs who push the boundaries to create new taste sensations.

We are truly impressed! This list highlights the best food in Hamburg, running from classic spots and Michelin star restaurants to hip and trendy eateries in Hamburg. Read on for our picks for where to eat in Hamburg!

Where to eat in Hamburg

Wondering what and where to eat in Hamburg Germany? We ate and drank our way through Germany’s second largest city and returned three months later to do it again. Check out our Hamburg Food Guide with the best Hamburg restaurants, cafes and bars

Hamburg has an open, modern atmosphere that reminds us more of Scandinavian cities like Helsinki and Stockholm than German cities we’ve visited in Bavaria. Though we’ve enjoyed spending time in Munich and Nuremberg, we felt an immediate connection to Hamburg and its sophisticated, culturally-open vibe..

As a country that seems to survive on wurst and schnitzel, Germany can be tough going for vegan travellers. Luckily, vegan Hamburg is alive and thriving with plenty of 100% vegan restaurants and plenty more that offer delicious vegan options. So if you’re hungry in Hamburg, get ready to feast!

So if you’re visiting Germany, make time to get to Hamburg. It’s a wonderful city, made all the better by the great food on offer!

Hamburg Restaurants on a Budget

Hamburg is quite a pretty German city, eh? Definitely worth a visit. Yet, considering the costs for accommodation, guided tours, tickets and stuff you might run out of cash faster than you can say ‘Elbphilharmonie’. Hence, for the temporary completion of the ‘Food Guide Hamburg’,

I got you covered with the 9 most affordable and best restaurants in Hamburg from breakfast to dinner. Those 9 restaurants and cafés stand the proof that you can dine out deliciously in Hamburg on a budget, too.

I recently hit the big three-oh. (Gasp!) Although – contrary to popular belief – my life didn’t drastically alter the second the clock ticked over into my third decade on this Earth, I admit that I’m already ruing the loss of the ability to state vaguely that I’m “twenty-something”.

To help me celebrate this milestone birthday, a few friends and I headed to Germany’s second-largest city for a long weekend of eating, drinking, and touristing.