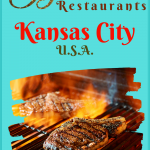 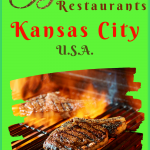 Before we begin exploring the best restaurants in Kansas City. We should acquaint ourselves with a little of the metropolitan history. Courtesy of the University of California.

Kansas City, Missouri has been incorporated three different times and has had three different names throughout its history. First, in the 1830s John McCoy established Westport Landing, at what is now Westport Road and Pennsylvania. At that time the town was essentially a boat dock. Soon after in 1850. A group of 14 investors settled in the area and changed the name to the Town of Kansas. When this happened McCoy was forced to move a couple of miles up the Missouri River. And establish a new settlement. The last change happened in 1889 when it became Kansas City.

Kansas City straddles the border between Kansas and Missouri and is situated on both the Kansas and Missouri rivers. This prime location easily attracted settlers, especially after the Louisiana Purchase in 1804. French fur traders arrived by the Missouri River, building cabins alongside it and creating the town of Kansas. The area was explored by Lewis and Clark. And later settled by a group of Mormons from New York in 1831. Who built the first school in the area. Two years later, Westport Landing was established, bringing in more investors to settle the area. Westport Landing and the town of Kansas were located on the three main trails driving westward expansion. The Oregon Trail, California Trail, and Santa Fe Trail. The city of Kansas was officially created by combining the two towns in 1853, with an initial population of 2500.

Leading up to the Civil War, Kansas City was located in the slave state of Missouri. But was not far from the border with Kansas, a free state of the Union. However, Kansas City was under Union control. And during the Civil War the city served as the Union’s District of the Border headquarters. Which added to conflict locally. In 1862 the Confederates won a crucial battle there. Following this with another victory, but in 1864 Kansas City remained under the control of the Union. The Battle of Westport, also in 1864, was fought within the limits of modern Kansas City. And was one of the largest battles west of the Mississippi River. This forced Confederate leader Sterling Price to retreat and end his Missouri Expedition. After the war, and the victory of the Union. Kansas City flourished and expanded rapidly due to cattle trade and railroads.

The Best Hidden Gems for Foodies in Kansas City

Of course, you can’t go to Kansas City without trying their INCREDIBLE BBQ!

So what makes it different?

Kansas City style BBQ is slow-smoked meat (pork, chicken, beef, turkey, sausage, lamb) that is rubbed in spices and slow-smoked over a variety of wood.

The barbecue sauce is tomato-based and served with the bbq.

A few of the favourite ways to eat it are pulled pork, brisket, beef or pork ribs. And the extremely popular “burnt ends”. Which are a fatty and crisp cut from the point of the smoked beef brisket.

When you hear Kansas City, chances are the first thing you think of is BBQ. Outside of that, Kansas City (or Kansas/Missouri) are some of the the most under-appreciated places in the US by foodies. However, their food scene is plentiful and you can find just about any cuisine you’re looking for. From hole in the walls to upscale dining and swanky restaurants.

There is something for everyone. During our weekend trip to Kansas City, I sought out some of Kansas City’s best dishes and treats and trust me, they have a ton delicious finds and we didn’t get to try nearly as much as we wanted. So, without further ado, here are 6 Must Try Restaurants in Kansas City.

Where to Eat in Kansas City

I recently had the opportunity to visit Kansas City, Kansas for a foodie tour. Driving along I-70, you’ll go through not one, but two Kansas Cities. And while Kansas City, Missouri may be a bigger city, Kansas City, Kansas is an up and coming foodie destination that should not be missed. It’s even been named one of “America’s Best Cities for Foodies” by Travel & Leisure Magazine!

My family and I take a lot of road trips. We’ve even driven clear across the United States a few times. And one thing we always look for is unique, local food. Whether you are driving through fly-over country, or you happen to be in Kansas City for business or pleasure, here’s where you should eat.

An Eater’s Guide to Kansas City

Every big bbq region hangs their hat on a unique style. In Kansas City, it’s all about the burnt ends (aka crusty tips of a brisket of beef or pork) and that famous spicy, sweet tomato-and-molasses barbecue sauce. Barbecue aficionados are crazy-opinionated about who does ‘cue right. Anthony Bourdain claims LC’s does some of the best ‘cue in the country, and if he’s saying it, I’m believing him. Go for rib tips, ribs, brisket, ham and more, plus slices of white bread for sopping up the sauce. Paired with a side of beans and coleslaw, it’s the perfect intro to KC barbecue.

Started by Russ Fiorella in 1957, Jack Stack is considered one of the most beloved (and a little fancier) barbecue joints in town. Three generations later, it’s still operated by the Fiorella family, and this institution is not to be missed. You can’t really go wrong here, but be sure to order the burnt ends and a side of cheesy corn bake.

So, given this trend, I figure, there’s quite a bit in Kansas that’s waiting to be discovered. I’ve begun a Kansas Bucket List in order to collect my thoughts and start making plans to get to know the state better.

A while back, my family visited Wichita and had a great weekend. It surpassed expectations. Along the way, we stopped in Lindsborg for lunch and to see, well, a castle. And again, that quick stop exceeded expectations.

Famously known for its jazz, blues and the red hot Royals, this heartland hub has a quaint, laid-back midwestern pace, with a surprisingly cosmopolitan vibe. Home to many a museum, beautiful fountains (there are around 200 of them!), and a magnificent farmers’ market that could give Pike Place a run for its money, KC is booming with culture and beauty. With more boulevards west of the Champs-Élysées, its been donned the “Paris of the Plains.”

In recent years, there’s been a huge revitalization to Kansas City’s downtown area, and new places are sprouting up left and right, making it more of an exciting place to visit than ever.

“When you see a fork in the road, take it” said Yogi Berra, and he could have been giving directions to LC’s, for it’s located on the triangle formed by the fork between Blue Parkway and Sni-A-Bar Road. If your windows are rolled down as you approach, you’ll probably know you’re close well before it comes into view.

It’s not a large place, and much of its business seems to be take-out. There are a few tables for eating in, and they provide a choice ringside seat to the goings on at the smoker. The brisket that emerges from that smoker is without peer, ineffably tender, smokey without being acrid, a perfect balance between fat and lean. The burnt ends “sandwich” is an impossibly large pile of meat chunks doused with their terrific celery seed accented barbecue sauce, garnished with white bread. The mountain of fresh-cut fries is first rate.

So is it the best BBQ in Kansas City? That’s not a question we can even pretend to answer. We do know that we don’t agree with those who denigrate the legendary Arthur Bryant’s. It may not be what it once was (we can’t say), but it’s still awfully good. In particular, we are simply addicted to Bryant’s hot-and-tart vindaloo-like barbecue sauce. A Kansas City barbeque tour should still, in our opinion, include Arthur Bryant’s, but we submit that a visitor cannot leave KC without a visit to LC’s. It’s as good as they come. Surely one of the best restaurants in Kansas City!