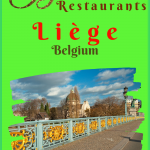 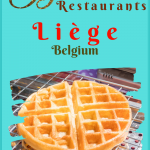 Before we start exploring the Best Restaurants in Liège Belgium, we should familiarise ourselves with a little Liège history from Eupedia.

Liège is has an exceptionally rich history, as well as prehistory, even by European standards. The oldest (pre-)human settlements in Belgium, dating from 800,000 years ago (Homo erectus), were found in Hallembaye, 15km north of the modern city centre. The world’s very first Neanderthal skull was found in the suburb of Engis in 1829, i.e. 27 years before the skeletons of the Neander Valley in North Rhine-Westphalia, after which the Homo species was named.

Belgian cities typically have different names in French and Dutch, and occasionally in English and German too. Liège has the unique distinction of being translated in a dozen European languages – more even than Rome, Paris or London. Furthermore, Liège has various historical names in French too. In fact, the city’s name in French doesn’t seem to have stabilised yet. Liège was spelt Liége until 1946, which shows a slight evolution in the pronunciation.

Anybody can guess that the Italian Liegi, the Spanish Lieja and the Latvian Lježa derive directly from the French name. Confronted to the German Lüttich and the Dutch Luik, bearing so little resemblance with the French spelling or pronuciation, one could wonder why a city can be called by such different names by people living next to each other. To understand this, we have to go back to the original name of the place, before modern French, German or Dutch languages came into existence.

When travellers visit Belgium, they usually set their sights on Brussels and cities in Flanders like Antwerp and Bruges. But there is plenty to see and do in the south of the country too.

With its proximity to the German, Dutch, and Luxembourg borders, Liège makes an excellent base for exploring a whole range of European countries. Whether you’re looking for a fun day-trip from Brussels or a weekend getaway, why not consider Liège for your next holiday in Belgium?

Food and Beer in Liege

Visiting Liège for the first time I discovered a fascinating city, rich in history and culture. However, Belgium also provides a feast for foodies – there are some wonderful restaurants in Liège to discover along with renowned Belgian chocolate, waffles and craft beers. On my recent visit to Liège it seemed rude not to indulge – so indulge I did.

Dinner on our first evening was at Bruit Qui Court, a restaurant just a few minutes walk from our hotel, ideal after a day travelling.

I put together my own itinerary for three days of unique things to do in Liège Province and opted for a mix of outdoor, cultural, and culinary activities. Check them out below.

I’m always up for exploring a bit more of my home country Belgium but being the workaholic that I am, I often need a kick in the behind to do so. This time, that kick came from the Province of Liège. They’ve put together a list of unusual things to do, places to stay at and places to eat at in the province and asked me if I wanted to come discover some of them.

Between sandwiches and coffee, Juliette met the honor of healthy and delicious products, with ease. A unique concept that deserved a unique layout. How to give an identity to a place that does not yet exist and whose concept continues to mature? In close collaboration with the graphic studio Signes du Quotidien, we defined step by step the contours of this new space.

The hanging garden which dresses the ceiling gives a particular cachet to this place. The brick wall, the tone on tone and the use of black and white reflect the simplicity of the kitchen in the layout.

How to get there? The best way to travel to Belgium is by plane if you’re arriving from a far place. However, Belgium is easily accessible by train from its bordering countries and as well by car and by boat.

What type of electric plug do they use? Types C and E. Read this post for more information about adapters.
Neighboring countries? France, Luxembourg, Germany, The Netherlands, and the UK.