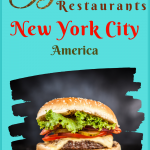 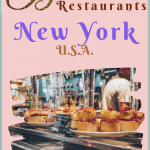 Before we take a look at the best restaurants in New York, we should look at the history of this hugely successful city.

The first native New Yorkers were the Lenape, an Algonquin people. They hunted, fished and farmed in the area between the Delaware and Hudson rivers. Europeans began to explore the region at the beginning of the 16th century–among the first was Giovanni da Verrazzano, an Italian who sailed up and down the Atlantic coast in search of a route to Asia. But no Europeans settled there until 1624.

That year, the Dutch West India Company sent some 30 families to live and work in a tiny settlement on “Nutten Island” (today’s Governors Island) that they called New Amsterdam. In 1626, the settlement’s governor general, Peter Minuit, purchased the much larger Manhattan Island from the natives for 60 guilders in trade goods such as tools, farming equipment, cloth and wampum (shell beads).

Fewer than 300 people lived in New Amsterdam when the settlement moved to Manhattan. But it grew quickly, and in 1760 the city (now called New York City; population 18,000) surpassed Boston to become the second-largest city in the American colonies. Fifty years later, with a population 202,589 it became the largest city in the Western hemisphere. Today, more than 8 million people live in the city’s five boroughs.

Everyone is talking about one place at the moment, The Big Apple. It seems like every blogger I follow has visited New York over the last couple of months (Lady Writes, Devoted to Pink, London Beauty Queen to name a few) and I have serious travel blogger envy! I absolutely love reading their posts; lusting after their amazing photographs of panoramic city skylines and piles of pancakes as taller than your head.

Plus of course, eagerly awaiting to see their ‘New York Haul‘ as everyone knows when you visit New York, you’ll need an extra case to get home. However, it wasn’t until I recently watched The Elle Next Door’s Travel Vlog from her recent trip to New York, I realised we had one thing in common – EATING ALL OF THE FOOD.

New York really is the city for eating and has got to be one of the only places in the world where every single cuisine is available – whether you are fancy a plate of Mexican Street Food at 9 am or a slab of cheesecake at 4am, New York will have you covered. And being the foodie I am (well, that’s the posh name for a little piglet) that’s why, deep down, I really can’t wait to visit.

When you think of New York City, “cheap” probably isn’t the first word that comes to mind. As far as cities go, New York tends to land on the pricier end of the spectrum, so cheap eats likely don’t seem easy to come by. But let me tell you, there are tons of cheap places to eat in New York City if you only know where to look! (And I am more than happy to lead you down the path of affordable options, because your girl knows how it feels to be on budget.

Visiting the city and need some great ideas about what to do besides eat? Check out this in-depth guide on how to spend 5 days in New York! And if you’re looking for some photo ops, here are some of the most Instagrammable places in NYC.

This is certainly not a secret for you anymore, we are definitely foodies! Sweet, salty, spicy, we like to try new flavors and test our taste buds whenever we are travelling. And that’s exactly what we did in New York City, known for its impressive quality and quantity in terms of food choices. Let us tell you a little bit about our New York City trip through our stomachs.

You have to know that while preparing of our trip to New York City, the meals were part of our itinerary. We wanted to test a lot of things we had heard about from France and there was simply no way we would miss them. As we are huge fans of burgers, we had to try out the famous Shake Shack burgers and it was a completely new experience! We went to the restaurant located in the Grand Central Station (there are a dozen around New York City) and the least we can say is that we almost fainted when we saw the impressive waiting line.

Everyone thinks that Chinatown is the best place to go for Chinese in NYC, but Flushing in Queens is a hidden gem for Chinese and Korean, and this place especially! The scallion pancake with sliced beef, shanghai udon, and pan-friend pork buns are my go-to favorites. Cash only, and one usually always has a wait, but SO worth the time and effort.

The massive portion is made in this white wine sauce that has a little kick to it, which adds an extra layer of flavor. As if that’s not enough, they are served with fresh-baked bread to dip into the sauce.

New York City is known around the world for its excellent culinary scene. From $1 pizza slices to 5 star dining the options are unlimited! With over 20,000 establishment in the city, it can feel a bit overwhelming when choosing a place to eat. Keep reading for our list of the 11 best restaurants in NYC that wont break the bank!

Mamma Mia 44 is a family owned Italian restaurant right in Hell`s Kitchen. The cozy atmosphere is very charming and the food is superb! Dinner entrees start from around $20 USD and they have an extensive selection of wine. Make sure to stop here on your search for the best restaurants in NYC.

20 Foods you MUST try in New York Restaurants

If you’re visiting the restaurants in New York City, you’re probably salivating at the thought of the food in New York City. As a native New Yorker living abroad, I got very hungry while writing this…but I hope that it provides some inspiration for some classic dishes and desserts that you must try in New York City.

I try to focus less on the cool instagram things, instead the classics that never change too much. That said, I include some crowd favorites. I’ve included also the best places to buy these famous New York foods in New York City.

New York City is undoubtedly one of the top foodie destinations in the world. Knowing where to eat in NYC has become as much of a sport as it is a skill. Through my dozens of trips to New York, hours of extensive research and reading reviews, and of course, first-hand dining experience, I have been able to compile the most epic list for the best and most popular places to eat in both Manhattan and Brooklyn.

I always say the best way to explore a new city is by mapping out all the restaurants you want to dine at. Sightseeing, tourist attractions, and even shopping are all second to, and determined by where I am eating on that particular day and time. Whether it’s your first time in the city or your hundredth, below you will find all the most famous places to eat NY classics and essentials, such as pizza, pastrami, bagels and beyond.