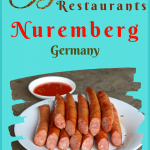 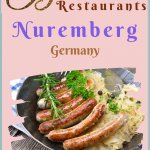 Before we begin exploring the best restaurants in Nuremberg we should take a look at the history of this great city.

Held for the purpose of bringing Nazi war criminals to justice, the Nuremberg trials were a series of 13 trials carried out in Nuremberg, Germany, between 1945 and 1949.

The defendants, who included Nazi Party officials and high-ranking military officers along with German industrialists, lawyers and doctors, were indicted on such charges as crimes against peace and crimes against humanity. Nazi leader Adolf Hitler (1889-1945) committed suicide and was never brought to trial.

Although the legal justifications for the trials and their procedural innovations were controversial at the time, the Nuremberg trials are now regarded as a milestone toward the establishment of a permanent international court, and an important precedent for dealing with later instances of genocide and other crimes against humanity.

To read the full story of the Nuremberg trials jump over to the History blog.

The Very Best Restaurants in Nuremberg

Nuremberg is super underrated. And that goes for restaurants in Nuremberg, too. Guys, that is so criminal. I’m about to phone the police and demand that they deal with this shocking state of affairs.

Open up a new tab, plop “what is Nuremberg famous for?” into Google, and you’ll come up with a whole host of answers dealing with the town’s history. Some of it quite dark. And maybe the pretty streets and castle. But very few articles state what should be one of the obvious answers. The outstanding quality of the restaurants in Nuremberg and the food served within them! There’s zero doubt in my mind. Nuremberg deserves to be up there with the other jewels in the Germany foodie crown.

The Best Restaurants for German Food

So let’s take a journey into some of the best Nuremberg restaurants. We’ll explore the best places to eat (and where to get the best schnitzel you’ll ever taste in your life). Salivate over our screens, and hope that I don’t get arrested by the police. For that call I just put in about restaurants. What do they mean, “waste of police time”? This is important!

Firstly, it’s just more fun to eat German food when you’re in Germany. I can get a pizza anywhere in the world; when you’ve made the effort to travel to Germany, it just makes sense to try the local specialities. So even though Nuremberg (or Nürnberg, if you want to be super German) has a vibrant international food scene, I’ve tried to list just the best German restaurants in town.

Where to Eat in Nuremberg

Secondly, German food is amazing!! Like Nuremberg itself, it’s most underrated: it’s cozy and comforting, filling and non-fussy. It basically appeals to everyone, and the local restaurants are conscientious in having vegetarian and vegan options in addition. Even if you’re a picky eater, you can’t go wrong with it.

Gets excited, folks, because you’re about to find your favourite restaurant in Nuremberg! It could be any of the following, because I guarantee you’re going to love them.

How can I be so sure? Because I’ve personally tried all of them below. So I’m not only going to recommend the restaurants themselves but, a recommended dish in each, too.

What to Eat in Nuremberg Restaurants

Hausbrauerei Altstadhof was the first place I went to after I arrived in the city – yup, even before the castle or town square, because that’s how I roll. And I was not disappointed!

Located in the altstadt (old town), just around the corner from the Albrecht Dürer museum, this wonderful place was founded in 1386, and I quite suspect that it’s been awesome ever since. It’s best known for the cellars underneath the building, which have been hacked out of the local stone in order for the beer to properly ripen – you can even take a tour of them if you fancy. It’s the local legendary beerhouse: it brews its own organic beers and whiskies, and my boyfriend tells me that the “rot beer” (red beer) is simply the nicest pint he’s ever had.

The German city of Nuremberg has many local specialities. Here are some of the best food and drink to try when you visit the city.

Whenever I visit a new city, the food and drink are some of the main attractions for me. I absolutely love researching the regional specialities, finding the best places to eat out, and of course, actually sampling the produce.

So when I was invited to visit Nuremberg in Germany for the first time, I knew that this was definitely going to be a focus for my trip.

The Places to Eat You will Love

Happily, the food is up to the same standard! The menu isn’t huge, but everything on there is a winner. It’s all good, hearty stuff, perfect as a winter warmer – and if you’re visiting around Christmas, there’s even a winter spiced beer you can try alongside your meal!

The restaurant area inside isn’t huge, so you may want to make a reservation to be on the safe side. Otherwise, you can be German about it, and share a table with strangers – which I highly approve of. Everyone’s friendly, and it’s a good way of meeting the locals. There is a large courtyard for al fresco dining, where you’ll almost certainly be sharing!

Although the German food list is a mile long, I’m going to keep this to foods you should specifically try if you’re visiting Munich (located in Bavaria), and Nuremberg (in slightly more-northerly Franconia). Both cities have culinary specialities, which can taste completely different if you sample them in the other location. There’s certainly enough to see in the area for even ten days in Bavaria – plus both Munich and Nuremberg are awesome, so you should definitely be visiting them anyway!

One taste of these German sausages, and my boyfriend and I were raiding the trusty supermarket for ones to bring back home (yes, we found them, and yes, they probably looked like Semtex on the x-ray scanner). As you’ve probably guessed from the name, these are a Nuremberg specialty – they’ve been making them in the town for an almighty 700 years, and are governed by strict laws to preserve their awesomeness.