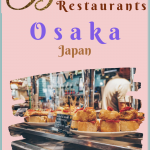 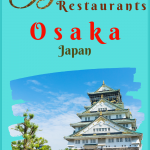 Before we begin exploring the best restaurants in Osaka, we should familiarise ourselves with this great Japanese city.

The city of Osaka has its beginnings far in the past. The first signs of human life and habitation in the area around Osaka were the discovery of buried skeletons. These were dated back to the 5-6th century before Christ. During the Yayoi period, the city experienced an increase in population. As rice farming grew and the port became a greater point of trade.

Due to the number of bigger, richer tombs, scientists concluded that the city was also a political centre. In 645, Emperor Kōtoku built the Naniwa Nagara-Toyosaki Palace. Making Naniwa the new capital of Japan. Shortly after, Osaka became capital. But, Naniwa kept being a centre and connection for trade with near prefectures and countries like China and Korea.

See the full history of Osaka on jpninfo.com

Osaka is a food lovers paradise. The second you get off the train after getting into the city you’ll instantly be greeted by the smells of alluring food stalls. The main action for grub is the Dotonbori street food, which we will cover in this post, but we will also cover what to eat in Osaka for first-timers or returning visitors too.

Located in the Kansai region, Osaka is Japan’s third-largest city but its size doesn’t detract from its friendliness. In comparison to Tokyo or Kyoto, Osaka has a very laidback vibe and it’s the kind of place where it’s easy to linger while feasting on delicious Japanese food.

Paradise of sweet delights, that’s what I thought when I arrived in Osaka. “Osaka food, here I come!” So if you are both a foodie and are planning to visit the land of the rising sun, then make sure you read up on this Osaka Food Guide.

Because here is where you will certainly find special treats. Some, of course, are found widely across the country but being the proud Osaka people they are, they have tweaked the recipes or even invented some. Therefore, you need to seek out the best restaurants in Osaka. So here’s where to eat in Osaka.

Osaka will always be one of our favorite destinations in Japan. Japan is one of the world’s best countries for food and Osaka is one of its most famous food cities.

Since 2014, we’ve been to Osaka a total of four times. Each visit gives us the opportunity to explore new restaurants and to continually update and refine this Osaka food guide.

50 Best Places to eat in Osaka

Welcome to Osaka, where all your food dreams come true at the ‘Kitchen of Japan‘. This sprawling city will never leave you with an empty stomach. Every way you turn there is some delicious meal to try. It’s no doubt why I chose Osaka as the city to begin my Japan trip!

I love Osaka for it’s a relaxed and fun atmosphere, like street food vendors lining the streets in Dotonbori and the rabbit warrens of bars and izakayas that are open till late. There are so many great things to try when you are in Osaka, like authentic Okonomiyaki, deep-fried skewers called Kushi Katsu and Gyoza served fresh and hot at 3 am.

What Foodies Eat in Osaka Restaurants

So I had takoyaki before I came here. But, apparently that was not the “right kind” and so I had to try again. The street food store we went to was rather snobby about my request of getting a vegetarian version. I am not too keen on having a piece of squid arm in my food. But, they plainly refused out of pride in their food.

Oh, well. I took it out then when they looked away. And really, it tasted much different to the takoyaki I had before (which I also helped make). Both were delicious and I absolutely recommend trying some yourself. And don’t miss out on the amazing takoyaki sauce together with Japanese mayonese.

However, the next time I go to Japan, I definitely plan to spend more than 24 hours in Osaka, the city that many call “Japan’s kitchen”. Join me for a day of strange mascots, amazing seafood, magical sodas, castles, hidden clocks, and acrobats. On the way, we might even accidentally get drunk! (Spoiler Alert: We will definitely get accidentally drunk.)

I went to Osaka as a day trip from Kyoto, so I’m going to suggest my lovely hotel in Kyoto, Kyoto Uraraka Guest House. It was in a neighborhood that was so safe, I saw children playing unattended in the nearby playground at night.

50 Things to do in Osaka

Are you planning a trip to Japan? Then let’s talk about things to do in Osaka. Because while most trips begin in Tokyo, no itinerary would be complete without a visit to “Japan’s Kitchen”. Osaka is a city filled with street markets, food experiences and restaurants galore, all of which make it a great destination for a first-time visitor – especially if you happen to be a foodie!

Located in the Kansai region, Osaka is Japan’s third-largest city but its size doesn’t detract from its friendliness. In comparison to Tokyo or Kyoto, Osaka has a very laidback vibe and it’s the kind of place where it’s easy to linger while feasting on delicious Japanese food.