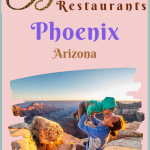 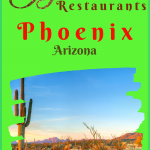 Before we begin exploring the best restaurants in Phoenix, we should take a moment to discover the history of this sprawling metropolis. The synopsis is courtesy of the official Government website.

Hundreds of years before any of the cities in the eastern part of our country were so much as clearings in the wilderness. A well established civilized community occupied the land we know as Phoenix. The Pueblo Grande ruins, which were occupied between 700 A.D. and 1400 A.D., testify to our city’s ancient roots.

The wide Salt River ran through the Valley of the Sun. But, there was little rain and no melting snow to moisten the brown earth. The land from the river to mountain range on either side was bone dry.

Those former residents were industrious, enterprising and imaginative. They built an irrigation system, consisting mostly of some 135 miles of canals, and the land became fertile. The ultimate fate of this ancient society, however, is a mystery. The accepted belief is that it was destroyed by a prolonged drought. Roving Indians, observing the Pueblo Grande ruins and the vast canal system these people left behind, gave them the name “Ho Ho Kam” — the people who have gone.

Phoenix’s modern history begins in the second half of the 19th century. In 1867, Jack Swilling of Wickenburg stopped to rest his horse at the foot of the north slopes of the White Tank Mountains. He looked down and across the expansive Salt River Valley and his eyes caught the rich gleam of the brown, dry soil turned up by the horse’s hooves. He saw farm land, predominately free of rocks, and in a place beyond the reach of heavy frost or snow. All it needed was water.

Returning to Wickenburg, he organized the Swilling Irrigation Canal Company, and moved into the Valley. The same year, the company began digging a canal to divert some of the water of the Salt River onto the lands of the Valley. By March 1868, water flowed through the canal, and a few members of the company raised meagre crops that summer.

However, by 1868, a small colony had formed approximately four miles east of the present city. Swilling’s Mill became the new name of the area. It was then changed to Helling Mill, after which it became Mill City, and years later, East Phoenix. Swilling, having been a confederate soldier, wanted to name the new settlement Stonewall after Stonewall Jackson. Others suggested the name Salina, but neither name suited the inhabitants. It was Darrell Duppa who suggested the name Phoenix. Inasmuch as the new town would spring from the ruins of a former civilization. That is the accepted derivation of our name.

Phoenix was officially recognized on May 4, 1868. Wthe Yavapai County Board of Supervisors, the county of which we were then a part, formed an election precinct here.

Finally, a post office was established in Phoenix on June 15, 1868, with Jack Swilling as postmaster. The sharp whistle of the first steam mill in the Valley added a brisk note to the sound of emerging industry. It advertised the Richard Flour Mills, built in 1869, where the Luhrs Tower now stands.

Phoenix is a foodie’s paradise with lots of restaurants to choose from and tremendous diversity for the kinds of foods available. From Middle Eastern to South American, Thai to Ethiopian, here is the guide to the best places to eat in Phoenix and the area around the city.

However, there are a lot of fun things to do in Phoenix. And eating in the many varied restaurants is one of them! If it’s a type of food, there’s a good chance you can find it. I love lots of variety, from more traditional cuisines to some lesser-known ethnic foods. Here are the restaurants I have been to that I most enjoy broken down a bit to help you find what you’re looking for.

The Absolute Best Restaurants in Phoenix

Spending some time in Phoenix and looking for the best places to eat in Phoenix? We have you covered with this list of tried and true places that have the best food in Phoenix!

Furthermore, I had written my complete guide to Phoenix years ago. But, I decided it is time to update a few pieces and share some more details about restaurants. We have our favourite date night restaurants coming soon, so stay tuned for that. But in this case, we wanted to include some of the best of the best. And local favourites for anyone coming for a visit.

A focus on modern American cuisine, seasonal and sustainable produce and stylish ambience abound in Phoenix. A location that is quickly becoming a South-western culture and foodie destination in its own right.

Furthermore, you can dine against a backdrop of dramatic panoramic views atop North Mountain. Embrace the farm-to-table ethos at a rustic farm or enjoy a handcrafted cocktail in a sleek, urban gastro-lounge. These are 10 of our favourite restaurants in Phoenix, Arizona.

Phoenix is home to some of the finest and most colorful family-themed restaurants in Arizona.

Whether you’re traveling with picky eaters or restless kids, you’ll find a restaurant in this desert metropolis that will satisfy the whole family.

And, guess what? We’re going to make things easier for you by rounding up the best fun family restaurants in Phoenix.

Offering one-of-a-kind culinary experiences, these 11 restaurants are reinventing the way children and their families dine.

A Chef’s Guide to Restaurants in Phoenix

Phoenix is a city of many flavors. All you have to do is drive around the 101 or 202 and you’ll find an edible landscape of spicy duck curry, jerk chicken burritos, and upscale cheeseburgers topped with fermented kimchi. With so many options, it can be difficult to decide where to eat, so we asked one of the Valley’s star chefs to show us around.

However, I always send people to the Central area [Central Avenue between Indian School and Camelback Roads]. You can have amazing coffee at Lux, a little pastry, maybe a cocktail, and get your work done or read a book and just relax. And then you have [Chris Bianco’s] Pane Bianco, which has amazing sandwiches and lunch fare, seasonal salads, and beautiful desserts.

I scream, you scream, we all scream for ice cream! Particularly when you live in a place where temperatures can start hitting 100 in April (truth, it happened this year!)! Luckily the desert-dwelling residents of the Valley of the Sun seemed to be a little obsessed with all things ice cream and there is no shortage of ice cream shops to get their ice-cold groove on. Today I’m sharing my top picks for the best ice cream (and all its varieties) in the Phoenix area.

However, if you love ice cream and are interested in the origins or history of ice cream. I highly recommend The Sweet Spot from Amy Ettinger. I read it last summer and included it in my summertime reading list and absolutely loved it!

Fun Things to do in Phoenix

A few months ago when the daily temperatures weren’t above 100 degrees. I had the chance to head to Phoenix Arizona to try out some outdoor adventures with a couple of my girlfriends! We had plenty of fun outdoors, ate amazing food, and stayed up way too late. Like you do on any good girls trip!