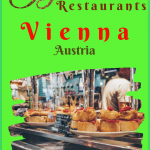 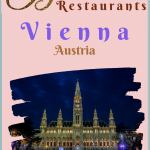 Before we begin exploring the best restaurants in Vienna, we should do a little homework. Vienna, city and Bundesland (federal state), the capital of Austria. Of the country’s nine states, Vienna is the smallest in area but the largest in population.

Modern Vienna has undergone several historical incarnations. From 1558 to 1918 it was an imperial city—until 1806 the seat of the Holy Roman Empire and then the capital of the Austro-Hungarian Empire. In 1918 it became the capital of the truncated, landlocked central European country that emerged from World War I as a republic.

From 1938 to 1945 Austria was a part of Adolf Hitler’s “Greater” Germany, and Vienna became “Greater” Vienna, reflecting the Nazi revision of the city limits. In the decade following World War II, Austria was occupied by British, French, American, and Soviet forces, and Vienna was divided into five zones, including an international zone, covering the Innere Stadt (“Inner City”). In 1955 the State Treaty, by which the country regained independence, was signed with the four occupying powers, and Vienna became once again the capital of a sovereign Austria.

Vienna is among the least spoiled of the great old western European capitals. Its central core, the Innere Stadt, is easily manageable by foot and public transportation. In a city renowned for its architecture, many of Vienna’s urban prospects remain basically those devised over several centuries by imperial gardeners and architects.

The skyline is still dominated by the spire of St. Stephen’s Cathedral and by the giant Ferris wheel in the city’s chief park, the Prater. The city suffered heavy damage in the last months of World War II, and much rebuilding was done after the war. Nevertheless, the character of Vienna as a whole remains much the same as in the years before 1914.

It would have been nearly impossible for me to get to all the best Vienna restaurants in the week that I spent there.   However, I am happy to share a few of my favorite Vienna restaurants. Here, you’ll find options ranging from where to find the best traditional Austrian food to fine dining, vegetarian options and even the best schnitzel in Vienna.

The Foodie Flashpacker shares his opinion on a selection of the Vienna Restaurants.

Many of us dream of running away from the rate race to explore the world. Few of us are brave enough to realise the dream. The Foodie Flashpacker appears to have accomplished it.

Food, glorious food. I love Viennese food! There are so many choices when deciding what to eat in Vienna so I tracked down some of the best traditional Viennese food that you simply must eat in Vienna. I’ve picked out my favourite traditional Austrian dishes, and some of the best places to eat them, so you know exactly what to eat and where to eat in Vienna! And, if you prefer to take a food tour in Vienna I’ve found some corkers for you too, from a market & food tour to a Strudel Show!

This surely has to be top of any list of what to eat in Vienna, and even what to do in Vienna.  Also written without the space in Austrian German, Wienerschnitzel is one of Austria’s national dishes and is a thin veal cutlet, which is breaded and pan-fried.  In Vienna, the Wiener Schnitzel varies in size and is often large enough for two people to share.

Usually served with a slice of lemon and potatoes, this was my favourite Viennese dish.  Although traditionally made with veal, pork schnitzel is very common, and often cheaper than the veal version.  In some restaurants in Vienna, you can also find chicken schnitzel but veal or pork is my favourite.

A group of friends, a delicious choice of food and someone else doing the cooking and cleaning up while you get to relax in the sunshine and have another coffee. Perfection.

When I first moved to Vienna I thought there were no brunch spots and I would wither and die without friends or sourdough toast with poached eggs and avocado.

I wasn’t entirely sure which I missed more….Luckily, I found friends faster than I found a good brunch spot, but eventually the brunch gems of Vienna revealed themselves.

Top Restaurants and Places to Eat

Vienna (and Austria) does have its own notable and delicious cuisine but you’ll also find restaurants serving other options for all tastes. When visiting the city you may be curious on some top options! Here are some of the best restaurants and places to eat when visiting Vienna.

For most of these restaurants and other restaurants throughout Vienna it’s worth checking their website and potentially calling up or booking a reservation online (if available).

What to Eat in Vienna

I went to Vienna last May, and I can’t exaggerate enough how much I loved it!

Vienna has easily become one of my favorite cities in the world and originally, it hadn’t even crossed my mind. I just added it to the itinerary because the flight was cheap.

Often called the City of Music, Vienna is the favorite home of composers. More composers have lived in the city than in any other city in the world.

Johannes Brahms, Wolfgang Amadeus Mozart, Franz Schubert, and Ludwig Van Beethoven are just some of the most renowned composers who have called Vienna their home.

Finding a good brunch spot in the super-hispter 7th district of Vienna is kiiiiiiinda like trying to find the sky – it is everywhere, always.

Of all the districts in Vienna, the 7th is undoubtedly overflowing in coffee shops, edgy fashion/coffee/art stores and many delicious brunch spots.

But not all brunch is created equal – so as we head into the weekend you can arm yourself with this selection of the best brunch spots in the 7th.

More to Eat in Vienna Austria

Knowing what to eat in Vienna is simple and hard at the same time. Wienerschnitzel and Sachertorte are world famous Viennese culinary highlights. But what else is worth eating in Vienna? This guide of the most popular Viennese food will have your mouth watering even before setting foot in the city.

Most Viennese food has their origin in the culinary highlights of the former nations of the Austro-Hungarian Empire. You’ll find a hint of Bavaria and the Alps mixed in with a healthy portion of Hungary, Bohemia, Moravia, and Italy. Further inspiration was found in Croatia, Galicia, Styria, and Slovenia.

Whether it’s braised, boiled, stewed, or fried – Viennese food is almost always comfort food. Vegetables and salads are but an afterthought to meat, potatoes, bread, and other carbohydrates.