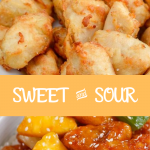 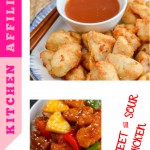 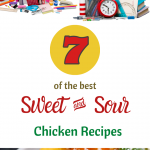 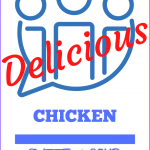 There can be no doubt that chicken is the staple food of the World. We can find chicken recipes in every cuisine from France to Korea and from Australia to the United States. And, sweet and sour chicken has got to be one of the most popular of these chicken dishes.

It is typical of many Chinese dishes in that it had been customised beyond all recognition by western society to cater for British and American tastes.

Don’t be fooled by the Chines recipe, it owes a great deal to the \british tstes of the 1970s when this first became a very popular dish.

And, before you comment, I do remeber the 1970s. I was there, albeit as a teenager but, I was very keen on sweet and sour chicken.

Luscious sticky Chicken is a wonderful dish. I love this sweet and tangy taste combination but, I confess, it is probably not my all-time, favourite Chinese chicken recipe.

Sweet and Sour chicken originated in the 18th century. It started life as a Chinese meal and spread with immigrant gold miners, to the United States.

Sweet and Sour chicken or sweet and sour pork is a stir-fried dish in a luscious sauce made from ketchup, chili and plum sauce. The true Chinese version of Ku lo sauce might use vinegar rather than plum sauce.

The sweet sauce may also use tomato, cucumber, pineapple and onion.

This Chinese Sweet and Sour meal has got to be the stock-in-trade recipe of Chinese Takeaway restaurants all around the World.

A luscious, sweet sauce makes this such a comforting evening meal.

Sabrina points out that we should not be afraid of homemade sweet and sour sauce. It is very easy to make and her recipe avoids the artificial food colourings the takeaway restaurants so often use.

Chicken is inherently healthy. And, with a homemade sauce you know there will be no added “E” numbers.

Tiffany shares her super-simple chicken recipe that can be made in only 30 minutes.

You can use rice as the accompaniment to your sweet and sour chicken but, noodles just seem to make it feel so much more authentic.

But, I may be biased because I love noodles anyway.

Aleksandra has added mushrooms and green beans to his recipe adding to the variation of flavour and texture.

Sometimes you don’t want the formality of a traditional sit-down dinner. So, when all you want to do is collapse on the sofa with your favourite nibble, these chicken nugget dips are ideal.

Chicken nuggets may be better known as coming from a certain fast-food outlet. But, is is incredibly easy to make these tasty supper nibbles at home.

This is a very descriptive name for this delicious dinner time treat. Crispy and sticky chicken has a super-sweet sauce that works beautifully with a savoury rice accompaniment.

Homemade food is always better than takeaway food. Check out the recipe for this simple meal your family will love.

The difference between chicken balls and chicken nuggets could be a very interesting teatime argument, to have while you are enjoying this tasty supper dish.

Jeanine came up with her recipe because she thought this was a Chinese dish that wasn’t available in the States.

Continuing our variation on a chicken theme brings us to the Actifry chicken bites.

It is probably a moot point when choosing the name balls, nuggets or bites.

However, they are all super-tasty, health-giving, dinner time treats.