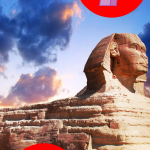 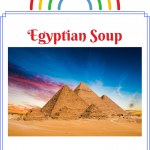 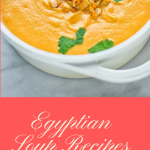 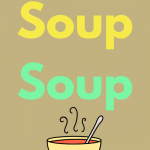 To my chagrin, I have never visited Egypt. It is a country full of history and amazing landmarks. I travel through food and today I am following the trail of Egyptian Soup Recipes.

This post is not about the Great Pyramid of Giza, nor is it about the mysterious Sphynx. We are exploring the people of Egypt through the soup of Egypt.

Like many countries in the region, Egyptian cuisine uses lentils to great effect. Many of the Egyptian Soup Recipes we shall taste are based on red and yellow lentils.

Ancient Egyptians were farming people. Thanks to the great Nile that ran north to the Mediterranean, Egypt is blessed with rich, dark soil perfect for growing arable crops.

Nobody went hungry in ancient Egypt. Food was plentiful and the Egyptian people excelled at preserving food for the dry season.

The ancient Equptians had a particular fondness for garlic. Their bread was sweetened with figs, dates and honey

And, the fertile land of Egypt meant that the Egyptian people had an ample supply of green vegetables.

Beer was an important part of the everyday Egyptian diet. Many people became sick after drinking the freshwater direct from the Nile.

The beer was made from barley and it produced a think drink, with a consistency of a modern milk-shake. It was not very alcoholic but, it was very nutritious.

The Egyptians also made a non-aloholic fruit drink from dates.

All of the people were free to fish the Nile. But, grain was stored centrally, so that the Paroah could distribute it fairly among the citizens.

This red lentil soup is both vegan and gluten-free. A fresh-tasting soup that is surprisingly easy to prepare.

This red lentil soup is packed with flavour and has a luscious texture, if you observe the correct cooking tomes for the lentils.

The colour if this beautiful soup is enough to have your taste buds tingling.

The cook behind this delicious soup found the recipe in the Copeland Marks book “Sephardic Cooking.”. This is an old recipe from the Egyptian Jewish community.

A green soup made from the mnced leaves of the Jute mallow plant.

Interestingly, Wikipedia has a variant spelling of mulukhiyah but, it is the same soup, made from the same ingredients.

This was a favourite way for Egyptian mothers to persuade their kids to eat vegetables.

Tomato soup is a perrennial favourite in the cuisine of many countries. Egypt makes tomato soup with chickpeas for their unique approach to this ever-popular soup recipe.

Can you imagine Tutankamun, sitting down to a bowl of this hearty vegetable soup.

Shorbat adas is a vegan lentil soup with cumin from Egypt.It is the staple meal of the month of Ramadan.

The countries of the Middle East have many variations of lentil soup using the different coloured lentils. The soup often includes vegetables in addition to the lentils.

Parsley, cilantro and spinach liven up the otherwise insipid turnip.

For the benefit, of my fellow Scots, this recipe uses turnip and not swede. Turnip alone has a delicate, sweet flavour which could easily be lost in a soup.

It is probably only me, but just the mention of fava beans conjures up images of Hannibal Lecter in Silence of the lambs.

You don’t need to have a glass of Chianti qith this Fava Bean Soup, but, lilewise, it it not forbidden.