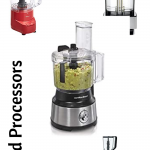 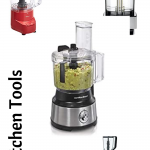 NOTE: If you are accessing this page from outwith the United States, some of the product links may not work correctly.

In our modern kitchens, it is easy to assume that food processors have always been around. But, there was a time when we had to perform all these tasks by hand!

The electric kitchen appliance we know as the food processor was developed in the late 20th century. The food processor has become an essential tool in the modern kitchen. It is used in food preparation for kneading, chopping, blending and pulverising the food.

The invention of the food processor is attributed to Pierre Verdon. His first kitchen appliance was the restaurant kitchen tool, the Robot-Coupe. This was refined for the domestic kitchen and became the Magi-Mix which was exhibited in Paris in 1971.

However, the creation of the Magi-Mix was not the end of the story.

Because, the American engineer and inventor, Carl Sontheimer, refined Vardon’s invention to create the Cuisinart. This was exhibited in Chicago in 1973, to great acclaim.

The success of the Cuisinart, spawned the production of many new food processor models. And a lot of manufacturers began producing food processors in the late 1970s.

If you want to know more about food processor history, read the full story on Encyclopædia Britannica.

This food processor has a scraper attachment which can clean the bowl while the processor is operating.

A powerful 450W motor with 2 speeds and a pulse setting. The 10 cup bowl has sufficient capacity for most jobs but, is small enough for easy storage. The bowl is fully dishwasher-safe.

The 5.5” super-wide feed chute means that most fruit and veg will not need to be pre-cut.

An LCD display shows the auto-timer count, both up and down.

1500W base unit powers the food processor which can make up to 2lb of dough in 30 seconds.

You may associate Black & Decker with home and garden power tools. But, the FP1600B is a very capable 8=Cup food processor.