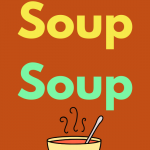 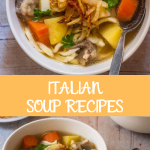 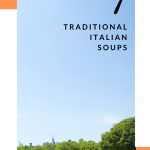 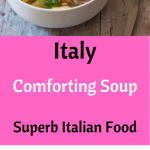 I was about to introduce this post by regaling you with tales from my weekend break to Rome. But, then I remembered, I have been to Italy on a previous occasion. I may well have tasted some Italian soup recipes because at the time I was an invalid.

Now that I have had time to collect my thoughts, I can confirm that I have been to Ital on three occasions.

The first occasion was as a very young child and I spent most of the time in hosptal because I had contracted quite serious food poisoning.

No, that’s not the kind of thing I should be admitting on a food blog. But, I was a child and my family were not seasoned travellers.

My second visit to Italy was a very brief stopover in Venice where we were to meet the cruise ship we were to sail on. We had ten spectacualr days around the Mediterranean.

My third and final visit to Italy was a well-deserved city-break to Rome. It was one heck of an adventure because my colleague and I were noth in wheelchairs. This makes fir some very unusual incidents in airports and boarding planes.

As a child, I had been on a touring holiday with my parents. Soon after we crossed the border into Italy, my health deteriorated. Imagine, a young child in a foreign country unable to communicate in this strange foreign tongue.

I had contracted severe food poisoning and spent a week in an Italian hospital. Suffice to say, my recent weekend break in Rome was far more agreeable.

The name translates as Past and beans soup. The fagioli in this recipe are cannellini beans. And, Italian sausage provides the spice.

This is a super healthy soup, loaded with vegetables and flavour.

Ribollita is a famous Tuscan bread soup that always contains leftover bread. The soup is generally a vegetable soup with many variations including this bean soup recipe,

Tuscany is in the west of the country, with the romantic Florence at its heart.

Nona would be the Italian grandmother. She would tell stories about Italian Wedding Soup. How the bride and groom would need sustenance to give them energy during the long day.

Italian men have a reputation for being very amorous, so the need for Italian Wedding Soup is probably as high as the Latin amor.

Tortellini are ring-shaped pasta originally from Bologna and Modena in the Emilia region of Italy. These are often stuffed with a mixture of pork and prosciutto.

Tortellini are delicious served in a tomato sauce on a bed of fluffy wholegrain rice. But, in this Tortellini soup, they are just heavenly.

For some reason, this meatball soup puts me in mind of the ubiquitous spaghetti and meatballs.

The beauty of this Italian meatball soup is that it is so much easier to eat than the rather messy spaghetti and meatballs.

I am discombobulated over the name of this dish. The soup does not use a stuffed pepper, although the ingredients could easily be combined to create a very tasty stuffed pepper.

This one-pot pepper soup is a superbly wholesome, delicious meal. Because if is certainly filling enought to be a meal in its own right.

I love to discover the origin of words. Stracciatella can be one of three Italian foods, a soup, a gelato or a soft cheese. In this recipe it is an egg drop soup.

Stracciatella di bufala, is a soft buffalo cheese from the Apulia region.

Stracciatella is also known as rag soup because straccetti means little rags and the egg mixture gives the appearance of little torn or shredded rags.

During our whistle-stop weekend tour of Rome, we managed to get to the Colosseum, St Peter’s Basilica, Trevi Fountain and the Sistine chapel.

Which barely scratches the surface of the possible historic locations we could have visited.

But, travelling with two powered wheelchairs does slow down your sightseeing.

Italian Soup Recipes for a postcard from Rome