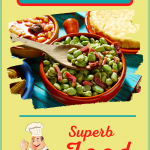 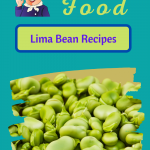 Packed with fiber, vitamins, and minerals, the lima bean is one of the most nutritious foods in the world. A favourite in the American South, limas are actually named after the capital of Peru, and they have more nicknames than any other bean: butter bean, Rangoon bean, Burma bean, Madagascar bean, and chad bean. Like common beans, they originated in Peru where they were cultivated even before corn.

They are so entrenched in Peruvian culture that they appear on the pottery of the Moche people, who inhabited northern Peru in the 15th century. Lima beans were also grown by Native Americans in the southern part of the United States and were brought back to Europe in the 16th century by explorers. Today they are also popular in Southeast Asia.

Lima beans come in three varieties: large, small, and dwarf. The smaller, pale green lima beans also have a number of nicknames: baby limas, sieva beans, Caroline beans, civet, seewee, and sivvy. Baby limas and green baby limas are considered milder and less starchy than large lima beans, which have an earthy flavor. Some American green baby lima beans are exported to Japan where they’re cooked, sweetened, and pureed into a paste known as anko, used as an ingredient in pastries and desserts.

The larger, moon-shaped limas (also called butter beans) are used in a variety of dishes. In America, they are featured in succotash and sugar bean recipes, as well as Kentucky burgoo, a savory stew commonly served at Derby Day parties. Lima beans also appear in paella and gigandes plaki, a Greek vegetarian baked bean dish. Baby limas and green baby limas have a delicate flavor and are delicious in curries and sausage stews. Lima beans must be fully boiled (or otherwise cooked through) before eating; like many legumes, they contain natural toxic compounds that are removed by cooking.

I once ate baked lima beans, made the Greek way, at a Mediterranean restaurant in Baltimore city. It came as a “mezze,” an appetizer, served at a restaurant of the same name. I was hooked. Although I tend not to love anything drowning in a tomato sauce, this dish was different. The creaminess of the lima beans was the perfect foil to the tangy tomatoes, reduced in the oven to a rich, mellow sweetness.

I have since made this dish many times, and although I can’t claim that it is a rip-off of the original, I daresay it is pretty good.

Limas are among my favorite beans to cook in a hurry because they get tender on the stovetop in no time at all– unlike most other beans that require hours, or, if you have a pressure cooker, at least a few dozen minutes. These lima beans are cooked to perfect doneness in no more than 25 minutes on the stovetop, without any soaking time. Now beat that.

There’s a local meat-and-three restaurant chain here, in my neck of the woods called Lizard’s Thicket that we go to a good bit. It’s the perfect place to go when you’re craving country cooking, especially vegetables!

Thet offer over 26 vegetables every day (plus daily and seasonal specials) which is why it’s my go-to when we need to pop out for a quick bite to eat.

Beef Stew with Lima beans is a very popular Lebanese dish. This Lebanese beef stew with green Lima bean is a great one pot meal that is full of flavor. It is made with simple ingredients and requires minimal prep which make it perfect for a family weeknight meal.

I use frozen baby Lima beans in this recipe because they cook quickly and taste great when simmered with a light tomato sauce.

This traditional Greek baked lima bean recipe with added veggies is a one stop meal. Gigantes Plaki is loaded with protein, perfect for all ages and so flavorful!

I’m back with amazing Greek recipes from Yiayia’s kitchen. Per usual, she put her own spin on the traditional version, because she’s my mom and nothing is ever good enough as is (so we all know where I get it from).

Let’s talk about lima beans. The first time I tried them, I was about 12 years old, at a friend’s house and I hated them. They were boring and bland. So one day, when my mom randomly made them, I was quite hesitant to eat it. But, I succumbed to the pressure and tried these beans once again. I was pleasantly surprised. Lima beans can actually be tasty and full of flavour!

If you don’t normally eat these beans, or have never tried them, I don’t know what you are waiting for! Lima beans are packed with protein and a wide array vitamins and minerals. They are particularly a good source of copper, manganese, folate, iron and cholesterol-lowering fiber.

It’s generally fair to say that most vegans use the plant-based palette available to them to keep their nutrient levels appropriately topped up. But it’s also fair to say that it’s pretty easy to fall into a menu rut, sticking with the standard tried-and-true recipes week after week, just because life is hectic and being vegan demands a great deal of time in the kitchen as it is.

The risk that the dietary rut represents, besides boredom, is that over time we will unknowingly become deficient in important nutrients. I’m an engineer by training, and I have no right to offer advice about nutrition. But I do like visiting the websites of people who are qualified to comment on vegan nutrition and seeing if their advice can help me choose better varieties of plant-based foods to keep my menu interesting and nutritious. This soup recipe came out of one such visit.

I’m on a bean kick, as you may have noticed with the last blogpost. And today, I’ve got a delicious lima bean stew for you. It’s easy to make and has a deep warming flavor from the use of green olives, smoked paprika, red wine, and plenty of garlic. Served with grated parmesan and crusty sourdough bread, it’s a perfect winter meal.

Beans are such a great cold weather food and traditionally, they were a large part of people’s winter diets. Today we often forget beans as an important (and tasty) source of nutrition.

Beans are high in protein and they have been shown in studies to help lower obesity, partly because they are high in fibre. They have also been found to lower the risk of breast cancer and they are a rich source of minerals that we need for good health. They’re also especially high in folate, making them a great food choice for pregnant women as they can help in the prevention of birth defects.