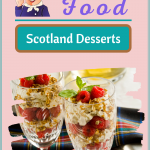 Before we delve intp our selection of Scotland desserts we sgould see how scottish cuisine has evolved over the years.

In pre-industrial Scotland ordinary people had a fairly frugal diet of ‘broses’ made from barley, oats, beans and pease cooked in a cauldron over an open fire. Foods such as kale and porridge featured prominently and are now promoted as superfoods.

In the past, those who could afford to would supplement this simple diet with milk and ale, butter, cheese and fish. However, in good times, people thrived on this limited but wholesome diet. In addition to these basic foodstuffs, the well-to-do ate large quantities of meat washed down with beer and imported wines. For most people though, meat was an occasional luxury. Reference.

The famous Scottish saying “S mairg a ni tarcuis air biadh,” (“He who has contempt for food is a fool.”) describes precisely the attitude to the food and cooking of Scotland. From the national dish of Haggis (sheep’s intestine cooked in a sheep’s stomach) to the finest whiskey in the world, and what would breakfast be without the ubiquitous porridge.

Like England, food in Scotland today is an eclectic mix of many cultures. English, Italian, Indian and Chinese. In Scotland, the Scots hold on tightly to their culinary heritage still using local, seasonal food. Oats are still widely eaten, as is fish, game, and of course beef. Scottish soft fruits–raspberries, strawberries, are renowned throughout the UK. Scottish cheeses, fruits, and vegetables likewise. Reference.

Coconut tartlets, or coconut and raspberry jam tarts are a big thing in Scotland. To be honest, they’re usually just called coconut tarts. If you grew up in Scotland, you’d know and love these little coconut treats which are sold in many bakeries, or made by many Scottish grannies.

If you’re a coconut lover, add these little beauties to your baking list.

They may not look very special, but as you noticed above, there’s a little raspberry jam hidden inside that gives these coconut tarts a special touch.

This is more of a Scottish cookie rather than one of the traditonal Scotland desserts.

Food is a huge part of travel. It’s tied to history and culture, and when we travel part of the way we experience another country is through what we eat.

Scones are my grandmother’s speciality. I’ve watched her make them countless times over the years as I grew up in New Zealand. Whenever there was a family occasion, my Grandma would make scones. The scone recipe is so ingrained in her that she doesn’t even use measurements anymore and does it all by muscle memory, look, and feel.

As we have previously intimated. It is not certain that a scone qualifies as one of the Scotland desserts.

Have you ever thought about taking two delicious treats and making them into one? After all, there’s cookie dough ice cream, cheese and pickle, and peanut butter and jelly… so why not Tablet Cheesecake?

We want to explore modern takes and new combinations on Scottish Scran, in addition to all the traditional Scottish foods. We love Tablet, and we love cheesecake. So making a Scottish Tablet Cheesecake recipe seemed like an absolute no-brainer!

Cranachan is a fresh Scottish dessert that was traditionally made to celebrate the raspberry harvest in June. It’s simple but super delicious! So much so that it’s even been called the “King of Scottish desserts”.

Given that it’s summer in Scotland and it’s raspberry season, we figured we should give making our own Cranachan a go!

Delving into the recipe books gave us a lot of different ideas about how to put together the perfect glass of Cranachan. The main ingredients were generally similar:

Classic Apple Crumble is a traditional and very popular warm apple dessert. Soft sweet apples are topped with a crisp buttery crumble topping to make one of the simplest desserts and one that makes everyone smile.

Classic Apple Crumble is just that, a classic. So I have kept the recipe simple with no extras. You can, of course, take the basic recipe and add your own touches if you wish. But first, I urge you to make it as it is and I think you will find that it needs no enhancement.

Sticky Toffee Pudding, a traditional British dessert, is one of those desserts you’ll dream about after the first time you taste it. This sticky toffee pudding recipe is easy to make, and freezes especially well.

The first time I had sticky toffee pudding was about eight years ago, at a hotel restaurant in the middle of nowhere, in the Scottish Highlands.

There’s a widespread tradition in European baking of holiday cakes that involve a contest or a prize. Normally these cakes have something special baked inside them — a charm, a bean, whatever — which marks out the lucky person who gets it as the King or Queen of the day.

In Scotland, the cake used for this has traditionally been Black Bun. The name is somewhat deceptive. It’s not a bun, but a densely textured fruitcake inside a pastry case: and the insides aren’t so much black as a really dark brown. In any case, Black Bun is always baked well ahead of the holiday so it has time to mature.