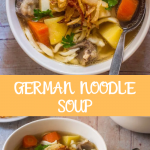 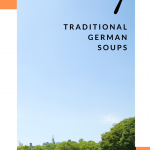 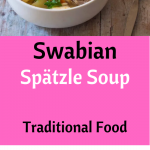 Soup is a staple food of many cultures and societies. Here, we take a look at a selection of traditional German soups from some of the states of Germany.

I usually have a short story to ragale you with when I introduce a new food location.

However, it has been many years since \i was last in Germany and my memory has collected too many cobwebs.

Nevertheless, I have one incident that should probaly be forgotten about.

I don’t remeber which German city we were in. At the time I was working in the music business and we were touring all around Germany.

We had sampled more than out fair share of German beer the previous evening and I was feeling delicate. My normal hangover remedy of those days, was a large glass of cool fresh milk.

We found a little restaurant and ordered some bread and cheese and a glass of milk.

However, what I was given made me retch. It was a nice tall glas of warm goat’s milk!

You may not, immediately, associate Germany with great soup consumption. But, having been a visitor to this incredible country, a long time ago, Soup does feature on the menu of many restaurants.

I think a warming ravioli sound far more appetising than the gost’s milk I mentioned on the last paragraph.

It has been my experience, that the Gemans have healthy appetites and thoroughly enjoy a good hearty soup.

Maultasche is the collective name for a number of Maultaschen. This is a traditional dish from the German region of Swabia and is not unlike the Italian Ravioli.

Ben at Ramshackle Kitchen brings us this delicious soup recipe alongside the many other German recipes and historical snippets that he collects.

Cabbage soup can be a great way to get the kids to eat their greens. This Kohlsuppe is also very comforting for any invalid you have recuperating at home.

Cabbage is a really tasty fall vegetable that will make hearty soup throughout the winter.

Potatoes are a fantastic vegetable, high in carbohydrates and vitamins. If you are on any AIP, they are fully Whole30 compliant. Of the German soups included in this post, this is perhaps the most traditional.

Potato soup is popular throughout the world and each country has its own unique variation. Kartoffelsuppe is the German variant and is a wholesome, creamy version.

Marta and Mathias travel the world looking for great cooking ideas to bring home to their blog. Their adventurous outlook on life means we can bring you this traditional German wild garlic soup recipe.

On a recent camping trip, they visited a favourite restaurant that specialises in locally gathered produce. Here they found this light, fragrant wild garlic soup.

I must confess to never having tasted Knoephla soup but, I love suet dumplings in a traditional stew.

Whilst assembling this post, I couldn’t help but notice a few pins for Knefla soup. I can only assume this is a variant spelling of Knoephla soup.

Another traditional soup from the Swabia region of Germany. This beef Spätzle Soup or Beef Noodle Soup is a delicious filling meal idea.

For health reasons and to help mitigate climate change, I have been reducing my beef consumption. This does not mean that it is unhealthy or in any way unpleasant.

Goulash may be thought of as a typically Hungarian dish but, this German goulash soup is a delicious, hearty and warming winter or fall meal.

Somewhere between a beef soup and a beef stew, this German goulash recipe is a delicious teatime treat for a cold winter evening.

If you liked these German soups, you may also like our French soups.